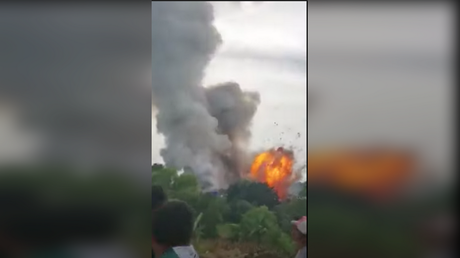 A fireworks factory in San Raymundo, Guatemala has exploded, inflicting two people with severe burns as others fled the blast scene. Footage posted to social media shows a massive white-gray plume of smoke over the town.

Two people have reportedly suffered severe burns during the explosion at the fireworks plant in the Sacsuy village between San Juan Sacatepequez and San Raymundo on Thursday, local media reported.

Footage purportedly taken from near the scene of the accident and shared online showed dark gray clouds spewing out of the factory before a bright red explosion. Other views show white smoke rising from the site.

Emergency personnel can be seen hosing down the fire in several of the videos, and multiple ambulances were said to be at the scene. It is not yet clear what sparked the blast.

Local firefighters posted an image from inside the factory on Twitter, revealing the charred and blackened interior.