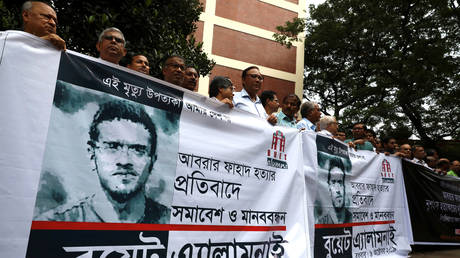 Twenty young men received death sentences in Bangladesh for murdering a fellow student on campus grounds after he criticized the government on social media. Five other defendants were jailed for life.

The court handed death sentences to 20 defendants, and ordered five others to spend the rest of their lives behind bars and pay a fine of 50,000 Bangladeshi takas ($583) each.

Those sentenced to death ranged from 20 to 22 years old and attended the Bangladesh University of Engineering and Technology (BUET) in the country’s capital Dhaka, when the murder happened in 2019. Three of them remain at large and were convicted in absentia, newspaper The Daily Star said.

In October 2019, Abrar Fahad, a second-year electrical engineering student, was found dead on the staircase of a dormitory. According to the prosecution, he was beaten with a cricket bat and other blunt objects for six hours by fellow students.

Bangladeshi media reported at the time that Fahad was attacked after making a Facebook post critical of the government for striking a water-sharing deal with India. The student reportedly argued that the agreement about the Feni River was against Bangladesh’s interests.

The attackers were said to have been members of the student wing of Awami League (AL), a major political party in the country. All defendants were expelled from the university for their relation to the case.

Fahad’s brutal murder sparked protests on campuses across the country. During the trial, eight of the defendants gave confessional statements, according to the media.

The court was quoted as saying that death penalties and life sentences were chosen to ensure that such murders are not repeated. “I am happy with the verdict,” Fahad’s father Barkat Ullah told reporters outside court. “Abrar’s soul will be at peace if the verdict is enforced quickly.”