HomeSport
By LordOfDailytimes on September 14, 2020 Sport 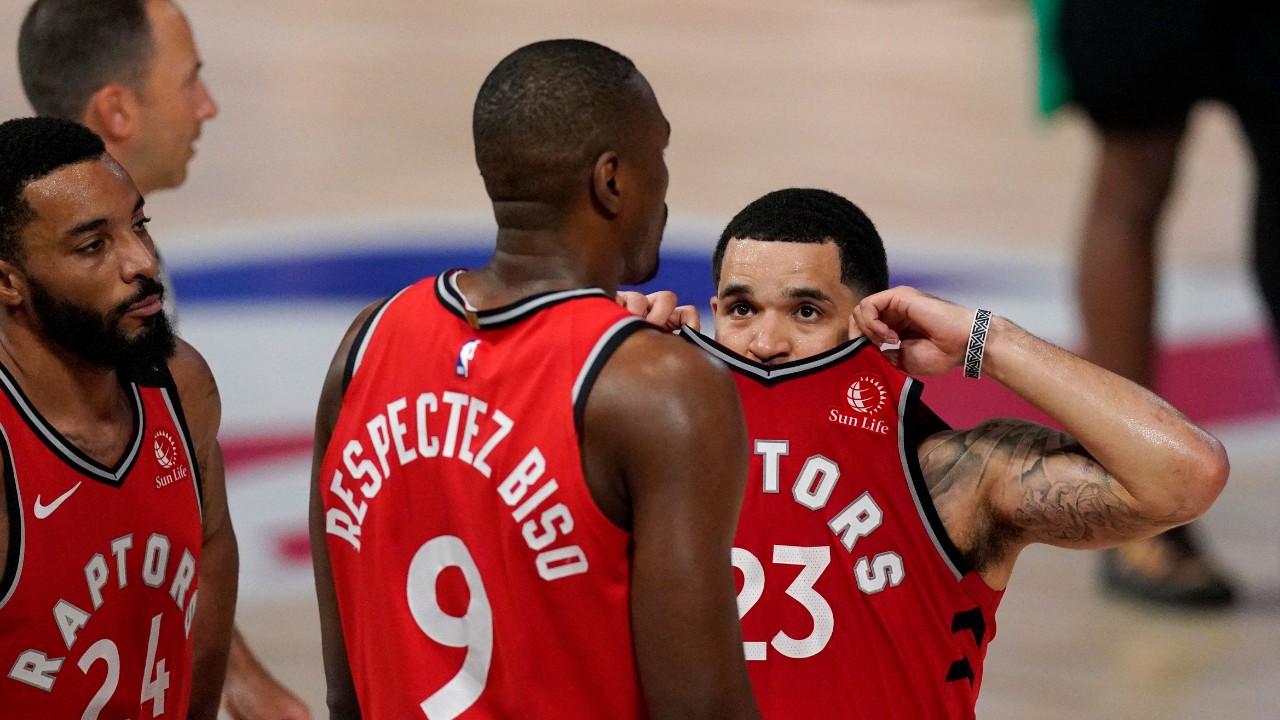 The Toronto Raptors are facing an off-season of great uncertainty that will likely leave the team looking a fair bit different than the one that fans have become so familiar with over these past two seasons.

The fog around the Raptors’ future stems from the fact that they have many decisions to make on key players entering free agency, and the fact that no one knows yet what the NBA’s off-season will look like — or even when the next season will start.

This all combines to make for a murky and difficult road ahead for the Raptors, but a relatively exciting and interesting one for outside observers. If you’re into the unknown, that is.

So, while the Raptors are likely looking ahead and gathering information on how this strange fall/winter off-season will work for them, here are five big questions that are probably on their minds and, if you’re a Raptors fan, should be on yours.

What will the salary cap look like next season?

This is the most pertinent question not just for the Raptors, but for the entire league. Its answer shapes the off-season, and at the moment no one has any clue what that answer might be.

Sure, there’s theories out there, with the prevailing one being that a flat cap is coming next season – meaning it will remain in the range of $109 million as it was for this season. That isn’t guaranteed, though, because of the double whammy of financial loss the NBA suffered from both the COVID-19 season suspension and the massive revenue hit from the backlash the league felt in China at the beginning of the season.

For the Raptors, in particular, understanding what the cap will look like is important because of the max extension Pascal Siakam signed last season.

Siakam signed a four-year, $130-million, 25-per-cent-of-the-Raptors’ salary cap contract extension, which will kick in next year. This was a figure based off the current $109 million salary cap.

But if the NBA is forced to lower the cap, that will take a lot of previously-negotiated money off the table for Siakam, certainly something neither he nor his agent would want.

And it would get even worse for Siakam if he is selected to the All-NBA first or second teams.

As Sportsnet’s Michael Grange first reported when Siakam’s extension was announced nearly a full year ago, the forward’s contract includes performance escalators tied to those end-of-season awards: if he makes All-NBA Second Team, his contract would be worth 28 per cent of the cap; first team would be 29 per cent; and if he were to win MVP (which he won’t, as he wasn’t named a finalist), his contract would leap to 30 per cent of the cap.

Siakam seems like a pretty good bet to be named to the All-NBA Second Team. That means, with a $109-million salary cap and the full eight per cent year-over-year raises, his extension would be valued at about $137.5 million.

So, in general, a lower cap means a whole lot less cash for Siakam.

What do the Raptors do with their three key free agents?

From this list of names, obviously the three that stand out are Gasol, Ibaka and VanVleet, who are all unrestricted and have been huge contributors for the Raptors in the past two seasons. Here’s a look at all three of their individual situations:

Marc Gasol: He’s coming off perhaps his worst season as a pro, averaging just 7.5 points, 6.3 rebounds and shooting 43.7 per cent from the field in an injury-riddled regular season. That was followed by an even more disastrous post-season that saw him average just six points and 4.4 rebounds on 39.1 per cent shooting. Gasol did himself no favours entering free agency.

Though not relied upon anymore to be an offensive force, the 35-year-old can still play decent enough defence to keep his career going strong, but certainly not at the $25.6 million price tag he was paid this season.

Given his struggles this season, Gasol’s market won’t be terribly hot. That’s something the Raptors, or any other team for that matter, will look to exploit as there’s still value to be had in a veteran big man who can play defence and is a proven winner – for the right price, that is.

Serge Ibaka: Ibaka, on the other hand, was nearly the polar opposite of Gasol this season, enjoying a career year in points and field-goal percentage. He carried over his strong play into the playoffs as well.

Making about $23.3 million this season and just about to turn 31, Ibaka has peaked late in his career, but just at the right time to get a big payday that will likely exceed the average value of his last contract (three years, $65 million).

Of the two centres, if the Raptors have to pick just one of them, Ibaka is likely their first choice to re-sign. But coming in at such a hefty price tag, with the big contract extensions of Kyle Lowry and Siakam also kicking in – as well as needing to figure out other free agent needs – Ibaka might force Toronto’s hand to look at more financially-prudent options and allow the big man to walk.

Fred VanVleet: A major reason why the Raptors could look to allow Ibaka to walk is because of VanVleet.

Arguably the Raptors’ second-best player in both the regular season and playoffs, VanVleet is due for a massive raise that will likely be more than double the value of the first “bet on yourself” contract he signed (two years, $18 million).

His combination of clutch, knockdown shot-making, sturdy defence and natural leadership abilities will make him one of the most desirable free agents out there. And it feels as if it’s a foregone conclusion that at least one team – perhaps multiple – will offer him a max contract, something the Raptors might not be able to afford.

VanVleet has proven himself to be a loyal person to the Raptors organization, but he’s also not blind to the realities of the business of basketball. His priority, as it should be, is to his family and his own situation, and if a team that isn’t the Raptors comes around with an offer none of us would refuse, why would he either?

Should Anunoby be given a contract extension?

The same dilemma the Raptors faced with Siakam and an extension now exists with OG Anunoby.

It’s not directly comparable to Siakam, who blossomed into a star during Toronto’s championship run, but during this post-season Anunoby did prove himself to be one of the more consistently strong performers on the team — highlighted, of course, by his game-winning buzzer beater against the Boston Celtics in Game 3 of their series.

Still, like Siakam, Anunoby will be eligible to sign a rookie-scale extension. That essentially means the maximum the Raptors will be able to offer him is 25 per cent of the cap, unless he makes certain performance incentives (in which case his contract’s value can increase).

Is Anunoby worth a max contract right now? Probably not, but his defensive potential alone means he could be, so by locking him into a max deal or close to one the Raptors would look at secure their future, of which Anunoby appears to be a significant piece.

The counter to this, of course, is by opting not to extend Anunoby the Raptors could choose to make him show them he deserves the big money from them. It’s a risky proposition, as it could end up upsetting Anunoby and his representation ahead of the next negotiation, but one that would give the Raptors greater clarity on what kind of player they have in the stoic forward.

Will the Raptors be able to lock up their executive leadership?

Their contracts will run out at the end of next season, meaning they’re all due for an extension. Seeing how instrumental each of these men was in the Raptors’ 2019 championship — and likely will be heading into this off-season and beyond — deciding their futures with the franchise will be of the utmost importance.

Otherwise, if an extension doesn’t get done, expect to hear non-stop rumour-mongering of just about every team in the league looking to poach one or more of these gentlemen come next off-season.

Lastly, this question is kind of important, and there’s no real indication when it’ll be resolved.

According a report from The Athletic’s Shams Charania, the next NBA season will start “no sooner than Dec. 25.”

Obviously, Christmas Day is a big one on the NBA calendar and this date was thrown out there to acknowledge that, but Charania also reported that the league prefers in-market competition with some fans and less travel as opposed to another bubble setting.

The viability of this doesn’t make the idea of next season starting even in late December all that feasible as things stand now with COVID-19, which is still running rampant around the world, and no news of a vaccine arriving any time soon.

And so, the Raptors and everybody else are stuck in a holding pattern until an announcement is made.

The NBA draft is tentatively scheduled for Nov. 18, but if the season starts really late the draft will likely get pushed back again as well, meaning the start of free agency will get pushed back. There’s also been no indication of whether there will be a Summer League (or a seasonal equivalent) or training camp.

And training camp figures to be very interesting for the Raptors this season because it begs the question of what happens if the world still isn’t COVID-19-free enough for Canada to lift its 14-day quarantine rule? Will the Raptors have to do camp somewhere in the States like they did for their restart camp in Naples, Fla.?

Additionally, would the Canadian government even allow the Raptors to hold games at Scotiabank Arena and allow travelling teams across the border?

It’s all up in the air, and until the coronavirus pandemic finally comes to an end, the situation will remain as intangible as smoke.