HomeSport
By LordOfDailytimes on November 3, 2020 Sport 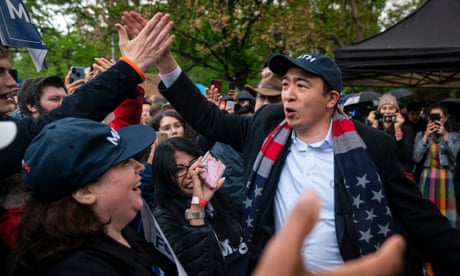 The former Democratic presidential candidate has been hotly tipped to serve in the cabinet of a Biden administration, where an overhaul of professional MMA could be a top priority

“You do karate, chink?” the biggest bully barked at Andrew Yang, as he kneed the future 2020 US presidential candidate in his groin and sent him face-first into the schoolyard dirt.

It was a taunting question Yang’s tormentors often asked him before they beat up the town’s only Asian kid. Yang was an easy target. He was smaller and scrawny compared to his peers – something he couldn’t help because he’d skipped a grade to join them. Yang endured years of beatings, until he decided to take his aggressors’ advice and train in a martial art.

Related: How the UFC became the sports arm of Donald Trump’s Maga regime

LordOfDailytimes
Previous ArticleThis Trending Coat Is So Warm It Almost Feels Like A Sleeping Bag
Next Article Covid-19: 1 Parisian infected every 30 seconds and the virus won’t stop for Christmas – Health Minister Veran