HomePolitics
By LordOfDailytimes on January 15, 2022 Politics 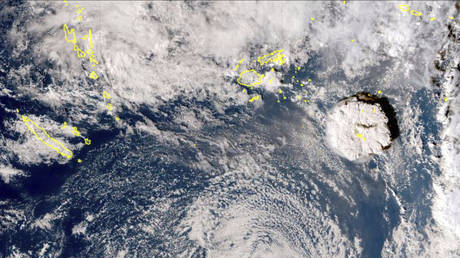 A tsunami triggered by a massive underwater volcanic eruption has hit the Pacific island nation of Tonga and prompted other nations to issue warnings. The sound of the volcano was so loud that it could be heard 800km away.

The underwater eruption from the Hunga Tonga-Hunga Haʻapai volcano occurred 65km south of Tonga’s main island of Tongatapu. It was so massive that it was clearly visible on images taken by several satellites orbiting Earth, including the US National Oceanic and Atmospheric Administration (NOAA) GOES-West. It has prompted several other nations, including the US, to issue tsunami warnings.

Footage on social media shows a giant gray explosion of smoke rising above the ocean and into the sky. The plumes of smoke, gas and ash reached an altitude of 20km, according to the Tonga Geological Services. The ash cloud was also reportedly almost 700km wide, according to some reports.

Ash fell in the Tongan capital of Nuku’alofa, according to some witnesses – and the sound of the eruption was reportedly heard across the Southern Pacific.

“Loud thunder sounds” were heard as far as Fiji, another Pacific island nation located more than 800km away from the eruption site, officials said. In New Zealand, a local weather forecast service, Weather Watch, reported that some residents also heard the sounds of a “simply astonishing” explosion, even though New Zealand is more than 2,300km away from Tonga.

Local meteorological services in New Zealand also recorded “incredibly unusual” air pressure readings. “The only time you might see this is if a tornado passed by a weather station,” it said. Tonga, Fiji and Vanuatu have all issued tsunami alerts.

A tsunami warning has also been issued for the US west coast, including staes of California, Oregon, Washington and Alaska, the National Tsunami Warning Center in Palmer, Alaska, said.

New Zealand’s National Emergency Management Agency said those on the north and east coast of the North Island could see “unpredictable surges at the shore.” Authorities in Australia’s state of New South Wales told people to “get out of the water and move away from the immediate water’s edge.”

Videos published on social media showed surge waves flooding the Tongan shore and destroying a fence, as well as rushing through some town streets and flooding a local church.

There have been no reports yet about casualties or property damage.

The Saturday eruption was one of the largest in decades, according to some assessments. It was the second in a series of eruptions, with another one recorded on Friday.