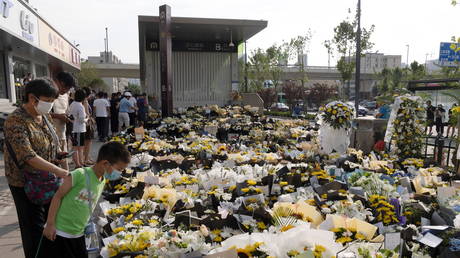 Authorities in China have said that the death toll from the devastating floods in Henan province has reached 302, most of whom died in the provincial capital Zhengzhou where a subway line was earlier flooded.

On Monday, officials told a media briefing that the death toll from July’s flood was now three times the figure of 99 that was reported the week before.

The vast majority of the fatalities were in the provincial capital of Zhengzhou. The city on the banks of the Yellow River, which is home to some 12 million people, has registered 292 deaths from the flood.

Officials said 39 people died when underground areas in Zhengzhou such as garages and tunnels were flooded, including 14 people who perished when a subway line flooded. A further 50 people are still missing across the province, with the majority, 47, from Zhengzhou.

During three days in July, a huge 617.1 millimeters (24.3 inches) of rain fell in Zhengzhou. The figure is nearly equivalent to the annual average of 640.8 mm. Previous meteorological records were also broken in Xinxiang, another city in Henan, after the city recorded 812mm (32in) of rainfall in three days, according to state media agency Xinhua.

Photos and videos have emerged online showing flowers and wreaths laid for those who lost their lives.

Xinhua reported that officials who failed to perform their duties will be held accountable.

China has continued to be affected by extreme weather in recent weeks, with footage showing extraordinary winds in Handan, Hebei province over the weekend.

Reports suggest some areas are also experiencing severe heatwaves while flooding continues to impact others.