HomePolitics
By LordOfDailytimes on November 19, 2022 Politics 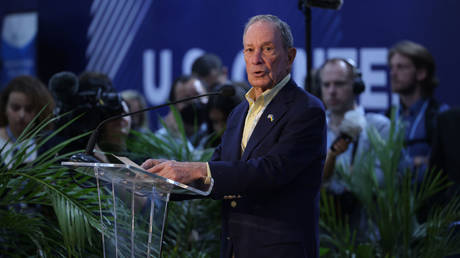 New York billionaire Michael Bloomberg has reportedly been forced to apologize to guests at a business conference in Singapore after former UK Prime Minister Boris Johnson gave a speech condemning China as a “coercive autocracy.”

The ex-mayor of New York City and failed Democrat presidential candidate acknowledged to the approximately 500 Asian businesspeople and diplomats at the Bloomberg New Economy Forum that some guests may have been “insulted or offended” by Johnson’s comments, The Guardian reported on Friday. “To those of you who were upset and concerned by what the speaker said, you have my apologies,” Bloomberg said, adding that the ex-PM’s incendiary remarks were “his thoughts and his thoughts alone.”

At issue was Johnson’s after-dinner speech on Tuesday, when he harshly criticized the governments of China, Russia, and other countries. He described the two world powers as “monocultural states” and “former communist tyrannies.” Beijing and Moscow “show a candid disregard for the rule of international law,” he added, and “in the last year have demonstrated the immense limitations of their political systems by the disastrous mistakes they have made.”

Johnson, who was forced to resign as PM in July amid multiple scandals, would have gotten away with such a speech on his home turf, The Guardian speculated. But speaking to regional leaders at a conference in Singapore, “the majority of Asian countries are much more favorably inclined toward China and share strong economic and diplomatic ties.”

A spokesman for Johnson stood by the speech, telling The Guardian, “Mr. Johnson is robust in his criticism of authoritarianism and autocracy – including in Russia and China – and will continue to be so. He will continue to make the case for freedom and democracy on the world stage.”

Conference guests called his speech “shocking” and “belligerent.” “People clearly felt uncomfortable,” one attendee told the newspaper. “He used very undiplomatic language about China, at a conference in Asia. A former British foreign secretary and prime minister should have known better.”

Johnson gave his speech the evening before the current UK PM, Rishi Sunak, planned to meet with Chinese President Xi Jinping at the G20 Summit in Indonesia. The meeting was canceled, which a UK government spokesman blamed on “scheduling issues.”