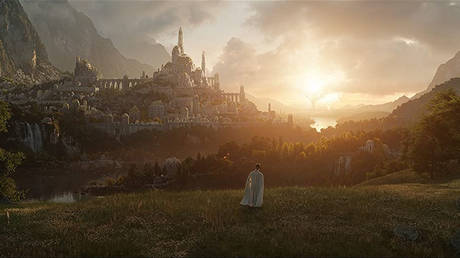 Amazon’s upcoming ‘Lord of the Rings’ series has drawn criticism for “preachy multiculturalism” after it emerged that the show will feature a diverse cast with a “tribe” of multi-racial hobbits and a “very strong female presence”.

Earlier in the week, British actor Lenny Henry revealed that he would be playing a “black hobbit” from an “indigenous” tribe called the Harfoots – a variety of hobbit described by Lord of the Rings (LOTR) author J.R.R. Tolkien as having darker skin.

Describing the series as a “prequel to the age” seen in the LOTR books and films, Henry told the BBC that the show was about the “early days of the Shire and of Tolkien’s environment”. In Tolkien’s fantasy world of Middle-Earth, the Shire is the green grassland home country of the hobbit people.

“So we’re an indigenous population of Harfoots. We’re hobbits, but we’re called Harfoots. And we’re multicultural. We’re a tribe. We’re not a race,” said Henry, who added that the Harfoots were made up of a number of different ethnicities.

Noting that it would take “at least 10 years to tell the story”, the 63-year-old actor said the series would be based on The Silmarillion – a collection of Tolkien’s works on Middle-Earth history and mythology that Henry described as “almost like a cheat sheet for what happens next in this world.”

Adding that the show’s writers had a “lot of fun in extrapolating it all out”, Henry also revealed that the series will feature a “very strong female presence” with “female heroes in this evocation of the story”.

Amazon had paid $250 million to secure the television rights to the franchise four years ago after founder Jeff Bezos demanded a ‘Game of Thrones’-style program to boost his company’s streaming service. The retail giant is reportedly spending $465 million for the first season of the show, which is scheduled to premiere next September.

In a May interview with The Hollywood Reporter, Amazon Studios boss Jennifer Salke said the huge budget reflected the need to “really [build]the infrastructure of what will sustain” a “huge world-building show”. She also expressed confidence that a “giant, global audience” will “show up to [watch]it as appointment television.”

However, the majority of social media users reacted to news about the diverse cast by denouncing Amazon for “preachy multiculturalism” and making a “mockery of Tolkien’s work and vision”. Several commenters stated that they would not be watching the show, which one person predicted would be “woke garbage, created with a strict ideological agenda and zero respect to actual story.”

“Did these idiots even read the books? Heck, watch the movies?” asked one person, while others drew unfavorable comparisons between the series and the Peter Jackson-directed LOTR trilogy by noting that “nothing will ever replace come close [to]the size and scope” of the early-2000s movies.

However, other users countered that the series was a “fantasy TV show” that was based on a “mythical storyline” – reasoning that it was “not out of place” to have “different races” in it. A number of people said the show creators had “modern audiences” and “contemporary values” in mind – with one person saying it “would be awkward” if a TV show made in 2021 featured an “all white” cast.