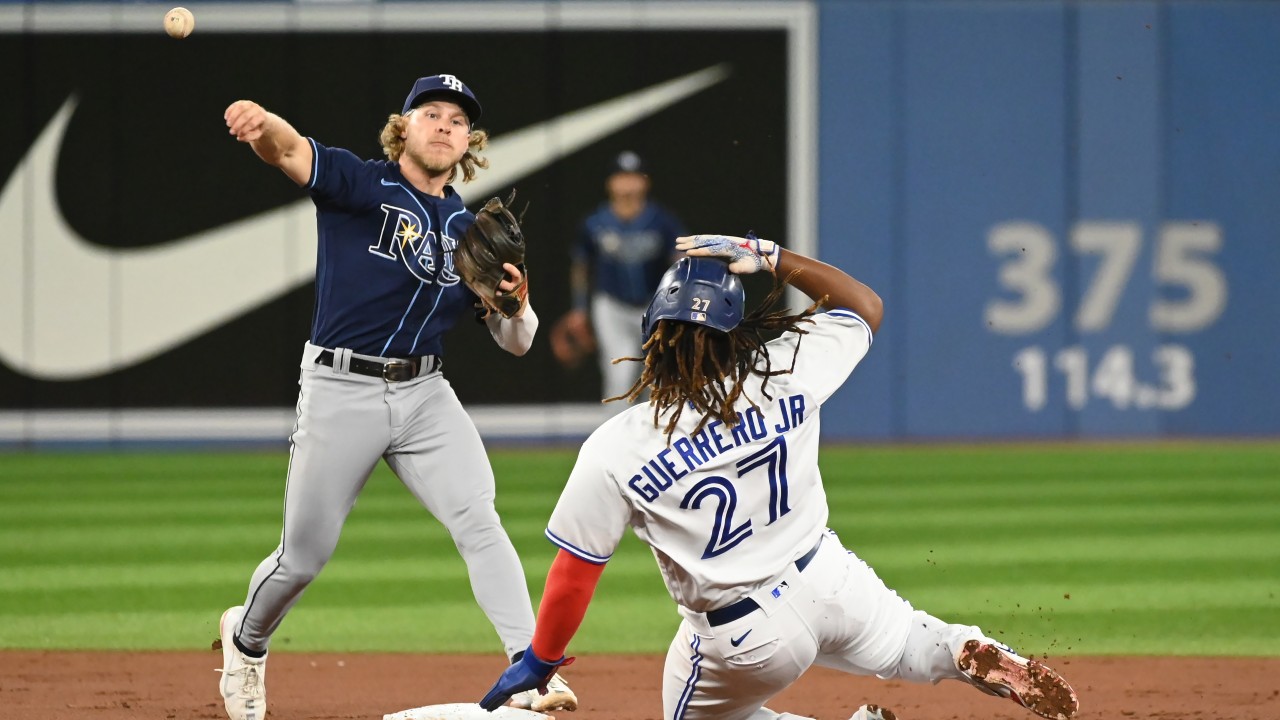 The battle for wild card position heats up in the Sunshine State as the Toronto Blue Jays face the slumping Tampa Bay Rays in a four-game series.

The AL East showdown comes a week after Toronto won three of five against the Rays at Rogers Centre.

The Blue Jays enter the series in the top wild card spot in the American League, two games ahead of the Rays and 2.5 up on the Seattle Mariners, who also are struggling.

Toronto is now 6.5 games back of the New York Yankees, meaning first place in the AL East is very unlikely.

However, a playoff spot seems all but assured. The Baltimore Orioles, who are fourth in the race for three wild card spots, are 6.5 games behind Toronto.

Here’s a look at the Blue Jays-Rays series.

(All games on Sportsnet)

Latest on the Blue Jays

The Blue Jays (84-65) settled for a split of a mini-series in Philadelphia against the Phillies after blowing a 3-0 lead in the eighth and losing 4-3 in 10 innings on Wednesday.

After Vladimir Guerrero Jr. opened the scoring with a three-run homer in the top of the eighth, Yimi Garcia couldn’t lock things down in the bottom of the frame.

Garcia exited with two out and the Phillies trailing 3-2. The home side tacked on another run after Jordan Romano came in and then won it in the bottom of the 10th against Adam Cimber.

The Blue Jays missed a glorious opportunity to take charge in the top of the 10th when Teoscar Hernandez lined into an inning-ending double play with the bases loaded.

Latest on the Rays

The Rays (82-67) are in a tailspin, having been swept by the visiting Houston Astros in a three-game series this week.

A 5-2 loss on Wednesday came on the heels of a pair of shutout setbacks.

Tampa went 25 innings without a run before tying Wednesday’s game at 1-1 in the sixth and going ahead 2-1 in the seventh.

But Rays reliever Brooks Raley gave up three in the eighth against his former team, leading to another loss for Tampa.

Tampa was 1-for-20 with runners in scoring position during the series.

It was the first time the Rays were swept in a home series of three or more games since April 2019, ending the longest active streak in MLB.

After Berrios on Thursday, the Blue Jays haven’t named starters.

The thinking is Mitch White (either in a bulk role or as a starter) and Alek Manoah will be the main men on Friday and Saturday in an undetermined order.

Ross Stripling then would be on schedule to make Sunday’s start.

Berrios, Manoah and Stripling all pitched well in Toronto’s wins against the Rays last week, while White kept the Blue Jays in an eventual loss in a good six-inning performance in relief.

Chargois will be the opener for Tampa on Thursday with Ryan Yarbrough expected to go bulk innings.

McClanahan, the Rays ace, left his start early on Tuesday with a neck issue, but the Rays expect him to be good to go for Sunday’s series finale.

A Tampa radio station reported Rays outfielder Randy Arozarena and infielder Yandy Diaz got into a physical altercation in the parking lot after Monday’s loss.

On Wednesday, Arozarena denied that was the case, saying the two simply exchanged words “over a couple of little things.” He added all is fine between the pair now.

The Rays lead it 8-7, meaning the Blue Jays need to win three out of four to get the tiebreaker.

The season series will determine who finishes higher in the standings if the teams end up tied.

Blue Jays outfielder Lourdes Gurriel Jr. remains out with a left hamstring strain, even though he is eligible to come off the injured list.

The Rays placed left-handed reliever Jalen Beeks (leg) on the IL on Wednesday.

Crowds usually are small in Tampa – and that certainly won’t be expected to change on Sunday.

Tom Brady and the Buccaneers host Aaron Rodgers and the Green Bay Packers in a late afternoon kickoff.

We’re guessing Tampa sports fans might be a bit distracted that day.

The Mariners try to avoid a sweep at the hands of the Oakland A’s on Thursday before opening a series in Kansas City against another bad team on Friday.

The Orioles open a four-game series against the AL-leading Astros on Thursday.

The Yankees are home for four games against the out-of-contention Boston Red Sox in another AL East battle.

The Blue Jays open their final homestand of the year on Monday when they begin a three-game series against Aaron Judge and the Yankees.

There’s a strong chance the Blue Jays will clinch a playoff spot next week in Toronto – marking the first time Toronto would lock up a post-season berth at home since 2015.