HomeSport
By LordOfDailytimes on May 24, 2021 Sport 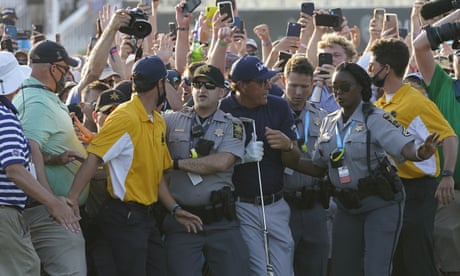 Brooks Koepka used the immediate aftermath of the US PGA Championship to voice displeasure at the crowd scene on the 72nd hole, where the 31-year-old insisted his recovering knee injury was placed in peril by euphoric fans. Galleries mobbed Koepka and the history-making champion, Phil Mickelson, as they completed their fourth round at Kiawah Island.

Koepka, who shared second with Louis Oosthuizen, was magnanimous towards the 50-year-old Mickelson. “Phil played great,” said the four-time major winner. “I’m happy for him, [wife]Amy and [brother and caddie]Tim.

Related: Phil Mickelson wins US PGA Championship in triumph for the ages

LordOfDailytimes
Previous ArticleDid You Know? Cat Butt With Googly Eyes Looks Like an Elephant!
Next Article Nerdy “50 Shades of Grey” Is a Hilarious Parody Twitter Account