HomePolitics
By LordOfDailytimes on October 16, 2022 Politics 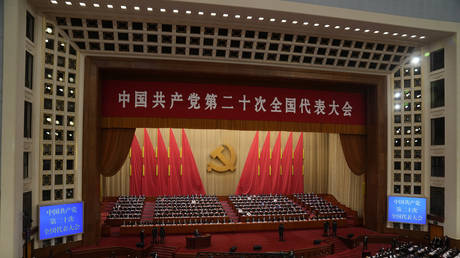 China’s leader Xi Jinping has delivered a lengthy speech at the opening session of the 20th National Congress of the Communist Party, in which he praised the party’s success in defending national security and social stability – and promised to advance the cause of national reunification.

“Resolving the Taiwan question is a matter for the Chinese, a matter that must be resolved by the Chinese,” Xi told some 2,300 party delegates on Sunday.

“We will continue to strive for peaceful reunification with the greatest sincerity and the utmost effort, but we will never promise to renounce the use of force, and we reserve the option of taking all measures necessary,” he warned.

Xi emphasized that his “Taiwan compatriots” should not take it as a threat, explaining that the warning was “by no means targeted” at them, but rather the “outside forces” and the “few separatists seeking Taiwan independence.”

The Chinese leader encouraged “people on both sides of the Strait to work together to promote Chinese culture and forge closer bonds,” adding that Beijing has “always shown respect and care for our Taiwan compatriots and worked to deliver benefits to them.”

Xi’s insistence that Beijing would pursue a peaceful reunification, but would not rule out using its military, is in keeping with an official government position laid out in a white paper published last month. In the document, the Chinese government affirmed its commitment to non-military means, but reserved “the option of taking all necessary measures” to return Taiwan to Chinese control.

Taiwan has governed itself since nationalist forces led by Chiang Kai-shek fled to the island in 1949, after they lost the civil war to the Communists. Taiwan’s current president, Tsai Ing-wen, is viewed in Beijing as a separatist. In addition to defying Beijing’s warnings and hosting top US officials on the island, Taipei has stepped up its purchases of US arms under her leadership and its diplomats have pushed Western nations to abandon their recognition of China’s sovereignty over Taiwan.

China has proposed a “one country, two systems” model for Taiwan. Under this, Taiwan could have a “social system different from the mainland,” on the condition that China’s “national sovereignty, security, and development interests” were not threatened. Taipei rejected the proposal, with its foreign ministry declaring last month that only the people of Taiwan could decide the island’s future.

LordOfDailytimes
Previous ArticleFlames start fast, hang on to beat host Oilers
Next Article These 6 Outfits Have Convinced Me to Try This “Old” Jeans Trend