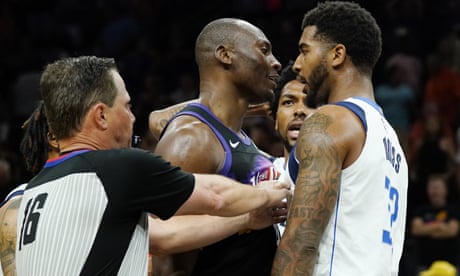 Phoenix’s Bismack Biyombo and Dallas’ Marquese Chriss were involved in a heated exchange towards the end of the Suns’ 110-80 playoff victory over the Mavericks on Tuesday night. Both men were ejected after tussling with each other on court and Chriss then followed Biyombo as he made his way towards the Suns’ locker room. TV cameras showed security officials going into the tunnel to make sure the players couldn’t get at each other after leaving the court. Dallas’ 7ft 3in center, Boban Marjanovic, also joined security staff in attempting to defuse the situation.

Biyombo and Chriss did not talk to reporters after the game but Suns coach Monty Williams said he did not want his team to be distracted from winning the series.

LordOfDailytimes
Previous ArticleEU has ‘no solution’ to fix damage from Russian oil ban – Hungary
Next Article MLB to return to London for regular-season games in 2023, 2024 and 2026