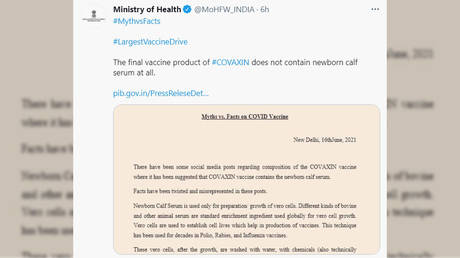 The Indian ministry of health has shared a document responding to claims that India’s indigenously developed Covid-19 vaccine, Covaxin, contains the serum of calves, Hinduism’s most holy animal.

In a tweet on Wednesday, India’s Ministry of Health countered “twisted and misinterpreted” information concerning the widely used Covaxin jab. The post confirms that calf serum is used in the “preparation/growth” of cells for the vaccine but is not in the final shot.

“Newborn calf serum is used only for the preparation/growth of vero cells,” which are a lineage of cells used in cell cultures. “Different kinds of bovine and other animal serum are standard enrichment ingredient used globally for vero cell growth,” the tweet read, adding that similar techniques are used for polio, rabies, and influenza shots.

The response came after Congressman Gaurav Pandhi claimed in a now-deleted tweet that the government had admitted in a document that the vaccine did contain calf serum. “THIS IS HEINOUS” he wrote, referencing Hinduism’s sacred belief in cows as deity-like beings.

The tweet and the document within it were widely shared around India, including by a number of prominent politicians.

In a later tweet, accompanied by a video message, he called on the government to not betray the trust of the people. “If Covaxin or any other vaccine consists of cow-calf serum, then people have the right to know.”

India has been battling to overcome myths and falsehoods relating to Covid-19 and vaccines. This is not the first falsehood to concern the animal worshipped across the country. In May, Pragya Singh Thakur, an MP from Bhopal, was criticized by doctors after she encouraged citizens to drink cow urine, like she does herself, to protect themselves against Covid-19 and lung infections. She was not the first lawmaker to encourage the drinking of cow’s urine.

One week earlier, doctors had pleaded with people not to believe in cow-dung treatments for Covid-19 amid a surge in alternative treatments and preventative measures.

LordOfDailytimes
Previous ArticleFrance relaxes mask-wearing rules, will lift nighttime curfew 10 days ahead of schedule
Next Article Low-Rise Jeans Are Officially Back. Who Will Be Wearing Them?