HomePolitics
By LordOfDailytimes on January 19, 2022 Politics 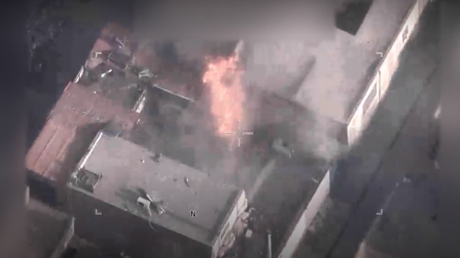 The botched US air raid killed 10 civilians in Kabul, most of them children

The Pentagon has released surveillance videos showing a US air strike that killed 10 civilians in the Afghan capital last year, one of the final American combat missions in the country as Washington ended its two-decade war.

Published by the New York Times on Wednesday, the declassified 25-minute video shows the moment an Afghan aid worker and nine other non-combatants, including seven children, were killed in the US strike, all captured by two drones flying over Kabul during the August 29, 2021 bombing raid.

While the military initially claimed the strike targeted members of the Islamic State (IS, formerly ISIS) who were transporting explosives – with one senior official deeming the operation “righteous” – it was later forced to backtrack and acknowledge that only civilians were killed in the attack.

Ahead of the strike, two MQ-9 Reaper drones trailed a white Toyota Corolla driven by a man later identified as Zemari Ahmadi, an aid worker with the US-based Nutrition and Education International. After following him for some time, Ahmadi’s car was struck as he pulled into the driveway of his home, seen around eight minutes into the footage. The blast engulfed the property, instantly killing Ahmadi and several children who rushed out to greet him, as well as other family members nearby.

A probe by the Air Force concluded that the operation did not violate any laws and recommended no disciplinary action. Though the investigation did find that surveillance footage showed the presence of at least one child near the site of the strike about two minutes before it was launched, the Pentagon said that would have been easy to miss in real-time.

“[In] two independent reviews that I conducted, the physical evidence of a child was apparent at the two-minute point. But it is 100 percent not obvious; you have to be looking for it,” Air Force Inspector General Sami Said told reporters in November following the inquiry, insisting the massacre was a “mistake” and not an act of “negligence.”

The declassified footage was obtained in a months-long Freedom of Information Act suit led by the Times, which was the first to uncover evidence the drone strike may not have killed any IS terrorists as the military initially claimed. The Pentagon also attempted to pin the loss of innocent life on a “secondary explosion” near Ahmadi’s home – suggesting he was indeed carrying a bomb in his car – but later said the fireball was likely caused by a propane tank, effectively abandoning any notion that he was a militant.