HomePolitics
By LordOfDailytimes on December 25, 2022 Politics 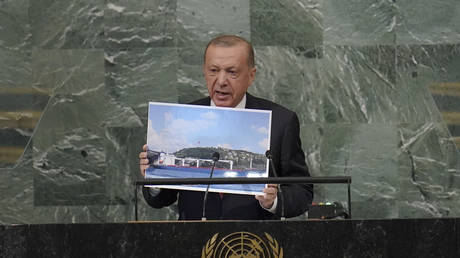 President Recep Tayyip Erdogan has praised Türkiye’s role in securing a grain deal between Russia and Ukraine, claiming in a speech on Sunday that unlike Ankara, Western nations did not make any tangible diplomatic efforts to resolve the conflict.

“Unfortunately, the West has only made provocations and failed to make efforts to be a mediator in the Ukraine-Russia war,” Erdogan said at a youth event in Türkiye’s eastern Erzurum province on Sunday.

Türkiye has thus “assumed this mediator role in 2022” and is set to continue its diplomatic efforts next year, building up on the success of the Black Sea corridor created as part of an Istanbul grain deal in July, Erdogan said.

The grain corridor was touted as a way to secure food supplies to the neediest nations as a matter of priority, but Erdogan confirmed Russia’s long-standing concerns, saying on Sunday that some 44 percent of the grain exported from Ukraine went to Europe instead. In the meantime Moscow voiced its readiness to supply African nations with “large volumes” of grain and fertilizers out of its own stocks for free.

Ankara adopted a neutral position early in the conflict between Russia and Ukraine, refusing to take part in the Western sanctions on Moscow, while continuing its military cooperation with Kiev – including selling a number of Bayraktar attack drones. A preliminary peace agreement was reportedly reached in Istanbul as early as March, but was later rejected by Ukraine under alleged pressure from the West.

The grain deal, touted as a rare victory for diplomacy, was signed in July by representatives of Russia, Ukraine, Türkiye and the UN, with a Joint Coordination Center set up in Istanbul to oversee the shipments. In late October, Russia briefly suspended its participation in the agreement, after accusing Kiev of launching a terrorist attack on the Crimea bridge, and drone strikes on ships involved in securing safe passage for agricultural cargo. Moscow ultimately returned to the accord after receiving unspecified “written security guarantees” from Kiev.

Last month, Moscow allowed “a technical prolongation” of the deal, but Russian officials have repeatedly voiced concerns that the deal is not meeting its stated goals, and have also insisted that the provisions on lifting the restrictions on Russian agricultural exports were not being fulfilled. The Turkish president expressed hope that the issue of fertilizer exports and Moscow’s other concerns would be resolved through “more intense” negotiations next year.