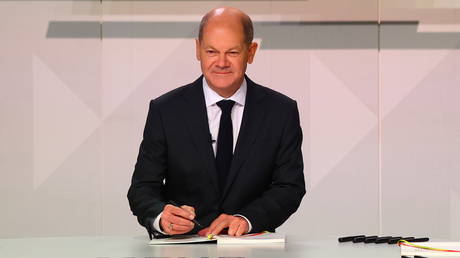 The new chancellor received 395 votes for his candidacy. Scholz needed the support of at least 369 lawmakers – an absolute majority – out of 736 Bundestag MPs. The three-party government coalition he heads occupies 416 seats in the Lower House of the German Parliament.

His election marks a major turning point in Germany’s political landscape, following 16 years of uninterrupted rule for Merkel’s conservative bloc, which was joined by either the Social Democrats or the Free Democrats during her four terms as chancellor.

Scholz is the fourth Social Democratic leader of the government in the nation’s post-war history. His party emerged as the strongest force in the Bundestag following the election in September, in which it gained a narrow victory over Merkel’s Christian Democratic Union (CDU) – led this time by her successor, Armin Laschet.

Scholz, 63, is a veteran politician. Between 2011 and 2018, he served as mayor of Hamburg – the second largest German city after Berlin – and which, like Berlin, is also a separate federal state. Between 2009 and 2019, he was the deputy head of the Social Democratic Party (SPD). He also served as finance minister and vice chancellor in Merkel’s fourth government, since March 2018.

LordOfDailytimes
Previous ArticleTop Indian general on board crashed helicopter
Next Article ‘This is a job’: Why college players reject the insidious term ‘student athlete’