HomePolitics
By LordOfDailytimes on September 20, 2022 Politics 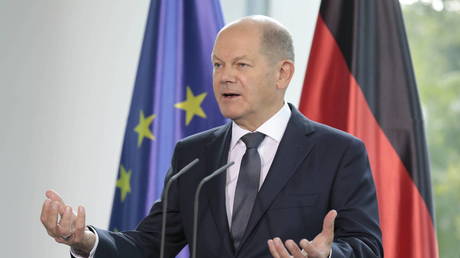 “I’m very irritated about this development,” Scholz told journalists in New York following his meeting with Turkish President Recep Tayyip Erdogan on the sidelines of the UN General Assembly. The chancellor said he believed the SCO was “not an organization delivering an important contribution to a good global coexistence.”

Scholz said, however, that the most important thing was to be in agreement with his counterpart over the Ukraine conflict, particularly on reaching an agreement on “how to make clear that the Russian war on Ukraine may not be successful.”

Erdogan announced Turkey’s plans to formally seek SCO membership during the group’s summit in Samarkand, Uzbekistan, last week. “Of course, that’s the goal,” he said, responding to a question about Ankara’s plans to join the group.

Earlier on Tuesday, the Turkish president also said he didn’t want to choose between the East and the West, adding that he does not owe the EU an explanation for all of his decisions. Erdogan slammed Brussels for keeping Turkey “out for 52 years.”

The SCO is an economic integration and trust-building alliance that was founded in 2001, and is now the world’s largest regional bloc. Currently, the SCO incorporates China, Russia, Kazakhstan, Kyrgyzstan, Tajikistan, Uzbekistan, India, Pakistan, and, most recently, Iran. Turkey, along with a number of other countries, is recognized as a special ‘dialogue partner’ of the group.