HomePolitics
By LordOfDailytimes on June 3, 2021 Politics 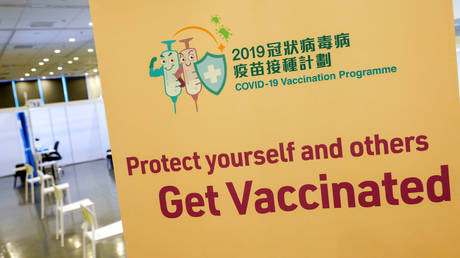 China’s autonomous region of Hong Kong has lowered the age limit for coronavirus vaccination, allowing children as young as 12 to take Pfizer jabs. China’s Sinovac shots, however, are still reserved for adults only.

The announcement was made by the region’s Health Secretary Sophia Chan on Thursday.

“Not only can it protect adolescents from Covid-19 infection, it can also enable them to resume normal school and daily life as soon as possible,” Chan said.

Starting from next week, children aged between 12 and 15 will be allowed to take the Pfizer-BioNTech vaccine. The jab was greenlit for children aged 16 and above back in April. Another vaccine widely used in Hong Kong, China’s Sinovac shot, remains authorized for adults only.

The autonomous region, that is home for some 7.5 million people, launched its mass-vaccination campaign in February. The program has been proceeding at quite a modest pace, with only some 14% of the population having been fully vaccinated so far.

Meanwhile, mainland China had distributed over 700 million vaccine doses by Thursday. While the official statistics do not tell how many people have been fully vaccinated against coronavirus, Beijing previously said it had been seeking to vaccinate 40% of its nearly 1.4 billion population by late June. The country has been administering around 20 million doses on a daily basis lately, and the announced goal is likely to be met.

China has kept the dreaded coronavirus well under control despite being the first country to detect the pandemic that had been plaguing the world for a year-and-a-half already. Beijing has registered only some 103,000 cases, with just over 4,800 deaths, repeatedly enforcing lockdowns and launching city- and region-wide testing campaigns, even over a handful of Covid-19 cases.

Globally, more than 171.7 million people have been infected by Covid-19, with nearly 3.7 million succumbing to the disease, fresh statistics from the Johns Hopkins University show.

LordOfDailytimes
Previous Article‘Slap in the face’: Namibian descendants of German genocide victims condemn aid deal
Next Article China criticizes US for being ‘world’s number one secret stealer’ after reports of NSA spying on allied leaders