HomePolitics
By LordOfDailytimes on October 28, 2020 Politics 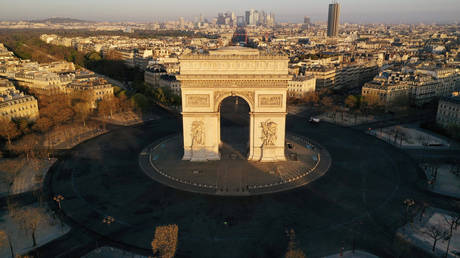 France will go into a new nationwide lockdown on Friday for at least a month as the spread of the coronavirus has exceeded even the most pessimistic forecasts, President Emmanuel Macron has announced.

“I’ve decided that we need to return to the lockdown which halted the virus,” Macron said in an address to the nation, while urging unity in the face of the challenge.

The measures will again restrict people to their homes, except for buying essential goods, seeking medical treatment or one-hour of daily exercise. Anyone going outside will have to carry a special document justifying their movements, which police could check.

The lockdown is initially planned to last until December 1, according to the president.Workers whose jobs can’t be done remotely will still be allowed to go to work, if their employer deems it necessary.

Restaurants, cafes and shops trading in non-essential goods are to be shut down for at least two weeks. They may reopen if the situation with the virus improves during this period, Macron said.

The restrictions are similar to those during the first lockdown that helped France stem the spread of the virus in spring, with one key difference being that most schools will remain open this time.

“The virus is circulating at a speed that not even the most pessimistic forecasts had anticipated,” Macron said, explaining the harsh measures. Just like its neighboring states, France is being “overrun by a second wave [of Covid-19], which we know will be harder, more deadly than the first,” he pointed out.

Night-time curfews imposed in Paris and other major French cities earlier this month, have proven ineffective in containing the resurgence of the disease.

On Tuesday, the country recorded 523 deaths from Covid-19 – the highest daily toll in France since the peak of the first wave in April. More than 35,000 people have succumbed to the disease in France, while infections since the start of the pandemic surpassed the one million mark last week.

LordOfDailytimes
Previous Article‘Insulting’ Prophet Mohammed cartoons should be a crime in France like ‘doubting Holocaust,’ says Iran’s Khamenei
Next Article 7 NHL teams that could weaponize their cap space