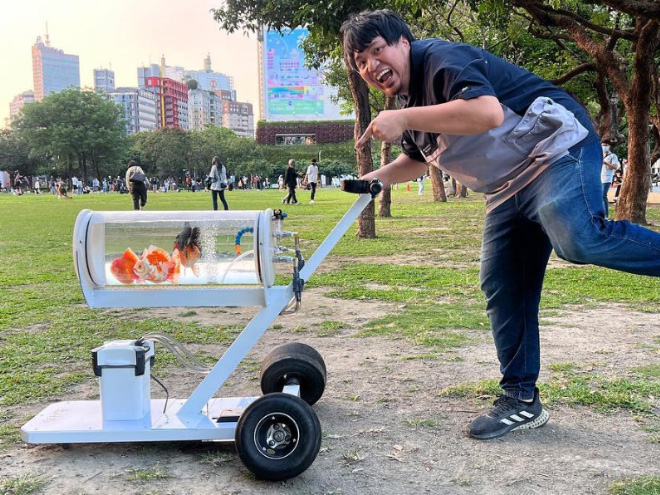 The problem with having goldfish as pets is that you can’t really take them for a walk like you can do with land animals like dogs and cats. Well, unless you build a custom fish tank on wheels, that is!

It all started with a series of posts on the Facebook Open Society group from members who claimed to have spotted a man walking his pet fish around Taipei in a contraption that looked like a fish tank on wheels. Some of the photos went viral, and people started commenting that the man pushing the fish tank was a popular Taiwanese YouTuber called Huang Xiaojie. Sure enough, coon after that, he released a video showcasing his invention, calling it one of his toughest challenges yet.

Huang Xiaojie basically welded a metal chassis as support for a sealed acrylic tube, put it on wheels and added a handle for pushing. The acrylic tube is the actual fish tank, and it comes with a battery-powered filtration system, an air pump for oxygen, as well as a lighting system, if you really want to show off your goldfish at nighttime.

Huang Xiaojie took his three gold fish for a long walk and seeing as they all made it back safely, he declared the project a success. His fans agreed, praising his resourcefulness, and hoping that such a fish tank actually comes to market one day, so they can walk their own fish. Some even offered suggestions, like a shock dampening system, to make the fish more comfortable. 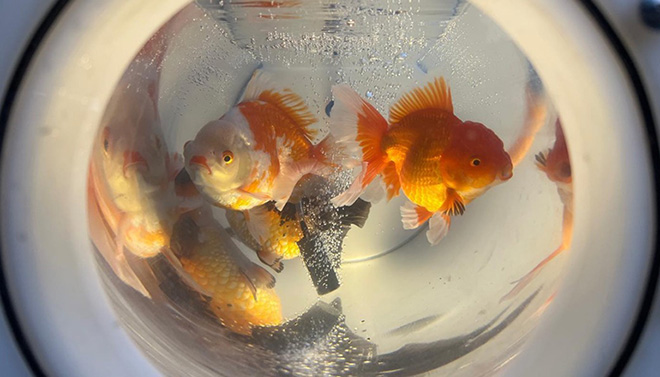 Believe it or not, this isn’t the first portable fish tank we’ve ever featured on this site. A while back, we made a post about another ingenious invention, the katsugyo bag – handheld fish tank to take fish for a walk and show them the beautiful world that humans inhabit.

The post Man Creates Custom Fish Tank So He Can Take His Goldfish For a Walk first appeared on Sad and Useless Humor.