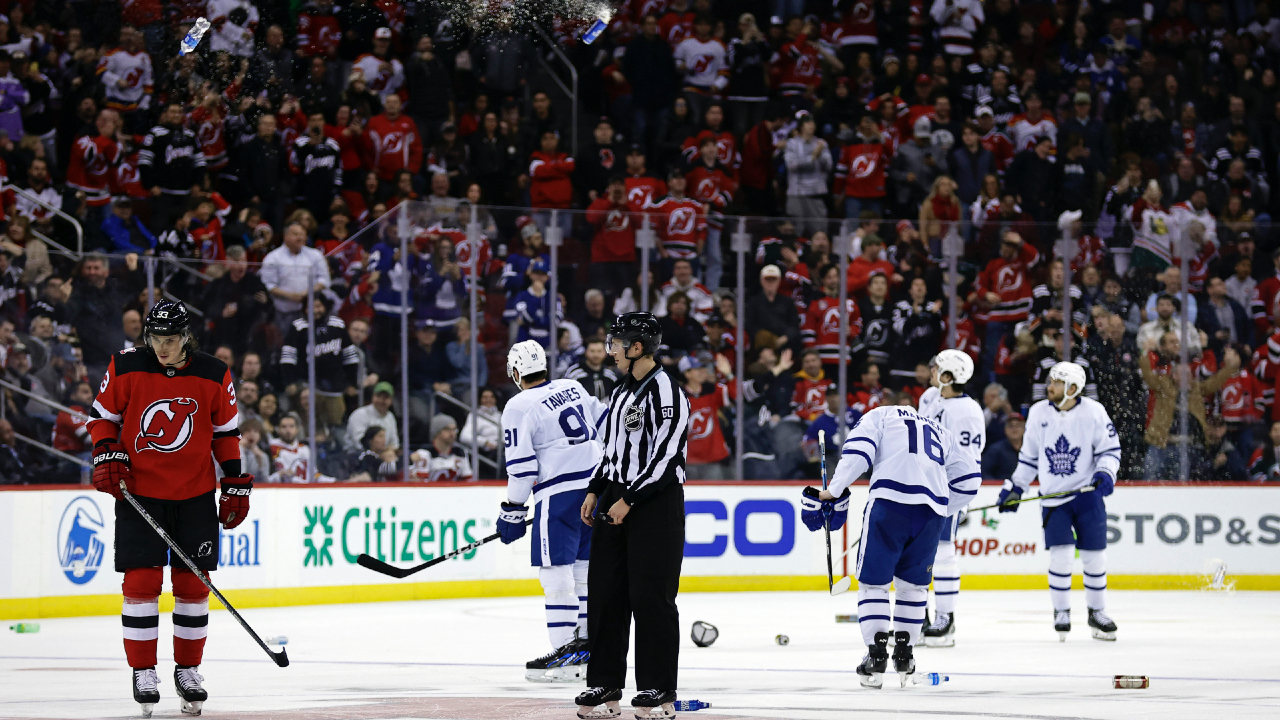 NEWARK, N.J. — They had to chip the beer stains off the ice before the Toronto Maple Leafs could leave Newark with their win. Had to collect the cans dotted around the sheet, dodging too the boos that rained down in booming abundance before the world-beating New Jersey Devils’ month-long win streak could be officially halted.

But on a raucous Wednesday night under the Prudential Center lights, Sheldon Keefe’s Leafs held on, saw it through, and halted New Jersey’s run.

“It was a playoff-style hockey game,” captain John Tavares said from the bowels of the arena after the final buzzer had sounded. “We got off to a really good start today, put ourselves in a really good spot. And then from there we just played a smart hockey game and stuck with it, knowing that they were going to push. … We talked about playing for 60 minutes, and I thought we did that today.”


Streaming Home of the Toronto Maple Leafs. Stream the most games at the lowest price, plus hundreds of other NHL games, the All-Star Game and Stanley Cup Playoffs. SN NOW STANDARD and PREMIUM let you choose how much hockey you want to watch.
CHOOSE PLAN

Getting to 60 in this one didn’t look like it usually does, though. Not after a rollercoaster 50 minutes that saw the Maple Leafs build an impressive two-goal lead, saw the Devils score not one, not two, but three goals that were ultimately disallowed by the officials, and certainly not after Tavares’ side was forced off the ice and down the tunnel as furious fans hurled cans after them in response to those calls, the projectiles just missing and splattering across the ice in their wake.

“I’ve never been a part of something like that, to be honest,” Mark Giordano, he of nearly two decades of NHL hockey, said of the chaos. “First one or two come down and you don’t think much of it, but then when it starts getting to the numbers it got, Keefer was motioning us to get into the tunnel and get off the bench and into the room.

“You don’t want to look up because you don’t want to get hit in the face or anything. But just get out of the way, get into the tunnel, so we were safe in there. That’s all we can do at that point.”

Needless to say, the Wednesday-night winners weren’t thrilled with the home crowd’s gesture.

“I mean, it’s full beers. It’s dangerous,” said Mitch Marner. “We’re not looking for that, we’re not seeing it coming. I dodged a couple. … (Rasmus) almost took one in the head. It’s a dangerous thing.

“It’s disappointing,” added Tavares. “It’s dangerous. It is what it is. I think it felt better to beat the crowd than the Devils tonight.”

In the standings though, it’ll be the Devils who take the ‘L,’ and there’s no denying the significance of the result for both sides. Rewind back a week and a half, and GM Kyle Dubas broke down the significance of this turning point for his group — for these Leafs, the chaos was raining down on them long before Wednesday’s hectic affair.

First came the Jake Muzzin news, then TJ Brodie, then Morgan Rielly — add Jordie Benn to that list too, as the veteran suffered an upper-body injury during the wild win over the Devils — but Dubas chose to see opportunity in the adversity.

“It’s a very positive thing. You learn a lot about the people that you’re with day in and day out,” he’d said after the first of those storms arrived. “You learn who can handle it, who may not be able to.”

Here, in this environment, against this team — one who hadn’t dropped a single game since before Halloween — his club showed it can handle it just fine.

At the centre of it all was Marner, who entered the night with a streak of his own, his 13 straight games of production level with the Devils’ 13 straight wins. In the end, it was Marner who won out, the winger putting on a masterful two-way showcase to push his streak to 14, and ensure Jersey’s came to an inglorious end.

After a night like that one, though, he isn’t focusing on the career-best run.

“Nothing, really,” the winger said Wednesday when asked what it meant to reach 14 games with a point on the board. “It’s cool, I guess. But it wouldn’t be done without a lot of guys in this locker room. So it’s a consistent effort from all these guys in here, and just the work that we’ve been putting in.”

That may be, but it was No. 16’s work primarily that put his team on the right foot early in this one, Marner fighting off three Devils deep in the offensive zone in the first period and pulling out a diving, backhand dish right to a streaking Tavares for the game’s opening goal.

A second tally a few minutes later — from Pontus Holmberg, for his NHL first — set the Leafs rolling.

And while it took a late scramble after New Jersey got one back, and a trio of hold-your-breath moments before that as the Devils thrice scored and then didn’t — the first called back due to an interference with Matt Murray in the crease, the second due to an interference away from the net, the third a kicked puck that found its way past him — the blue and white managed to make it through.

“I thought we did a good job of it,” head coach Sheldon Keefe said of how his group handled the wild affair, beer cans and all. “Obviously it got a little bit hairy there in the third period with the atmosphere, but it was an intense atmosphere right from the start of the game. That’s the most engaged I’ve seen fans here in New Jersey in my time in the league. … I thought our guys did well.”

Fresh off an overtime loss, with a slew of road games ahead and key injuries continuing to mount with each night, Keefe isn’t looking past this one.

“This is a character win for our team given what we’re going through here,” the coach said. “And to do it on the road, against this team, with how they’ve been playing and with that type of push and the atmosphere here tonight — this is a real good day for the Leafs.”