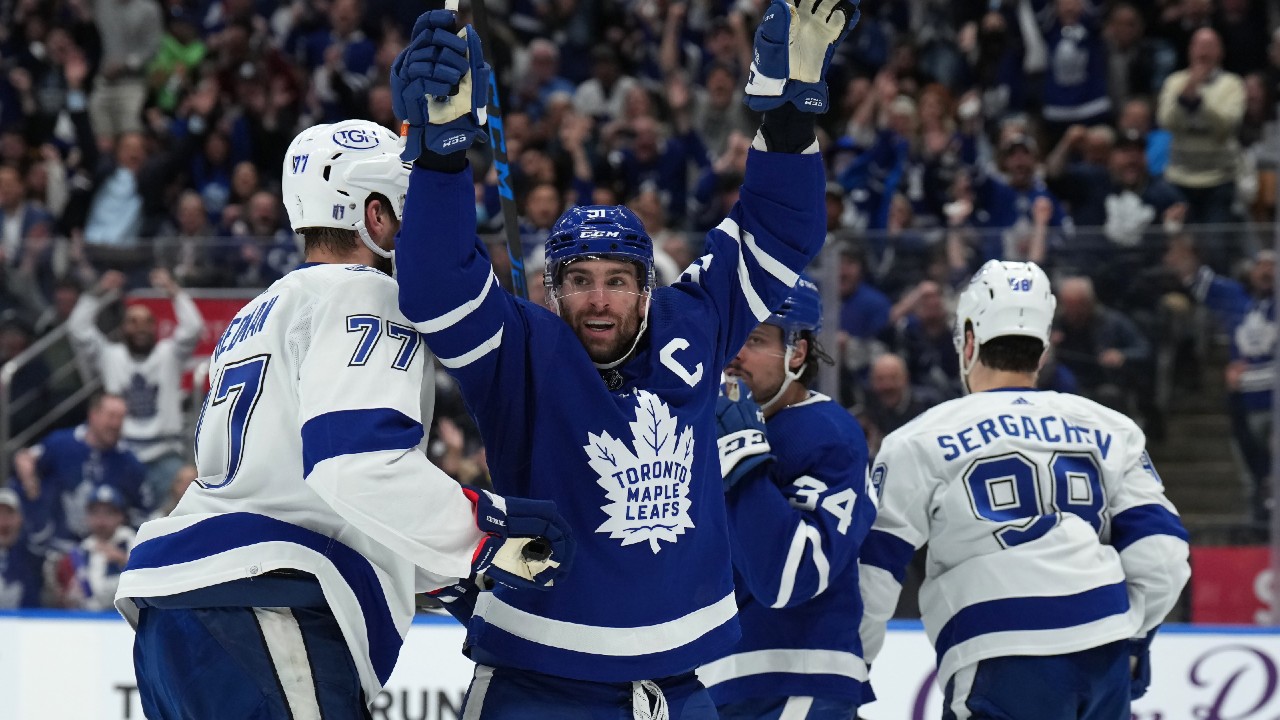 TORONTO – The first was troublesome.

The middle was encouraging.

Well, we wouldn’t blame you if it stole your breath away.

In winning a pivotal Game 5 by a score of 4-3 and securing a 3-2 series advantage over the Tampa Bay Lightning, the Toronto Maple Leafs — and their emotionally swinging fan base — rode the roller coaster as only they know how.

And what a ride it was.

Not unlike Sunday’s no-show in Tampa, the Maple Leafs looked lost and discombobulated through the first 20 minutes.

This time, Cup-hoister Steven Stamkos waited until the club’s second shot to blast the opening goal past Jack Campbell.

They had witnessed the Leafs surrender two goals before registering two measly shots of their own.

“One team has been really going, and one team has not,” said Leafs coach Sheldon Keefe, summing up the first four games of this seesaw set.

Entirely and familiarly, it appeared Toronto would be the one not going. The Leafs were outshot silly in the first frame, 14-4. They were ineffective on three power-plays and uninterested in the puck battles.

Following a morning of swearing they had grasped how strictly the officials would call the rules, William Nylander committed a poor holding penalty 200 feet from Campbell’s cage. Mitch Marner hooked Ryan McDonagh in the Tampa zone six seconds into a Toronto power-play.

“Every game has kinda been called the same, so we should have an understanding for it now,” Marner said.

Yet they didn’t show it.

Heading into the second period, the Leafs desperately needed a goal, a break — and got one, in the form of Tampa’s second too-many-men penalty of the night.

Toronto’s power-play clicked, and captain John Tavares popped on the board when he deflected a William Nylander shot past Andrei Vasilevskiy.

The crowd awakened, alert for the comeback.

Tavares set up Morgan Rielly to tie the game early in the third, and Nylander rode a giddy wave into a laser of a shot that gave the Leafs a lead — and signalled the first lead change of the whole series.

Ryan McDonagh knotted the night back up with an absolute bomb of a slap shot from the high slot.

But a Marner–Auston Matthews 2-on-1 rush with 6:06 remaining on the clock resulted in a Marner shot, a Matthews no-doubter rebound, and a goal celebration so emphatic it could’ve knocked out a heavyweight champion.

“It’s about keeping yourself together, because there’s ebbs and flows. The series never goes your way the whole time,” Jon Cooper said. “So when adversity hits, how are you going to handle it?”

The Series of the Counterpunchers shifts back to Tampa, where all the pressure now falls on Cooper’s bunch, their threepeat bid on life support.

How are they going to handle it?

• Keefe flipped Mark Giordano onto the top power-play unit and dropped Rielly to the second unit in Period 2.

• The Leafs temporarily lost fourth-liner Colin Blackwell in the first period when he took a Hedman clearing attempt to the head. He returned for the second and was buzzing.

• Patrick Marleau on Matthews and Marner in his Players’ Tribune retirement column: “Watching them and their love of the game made me fall in love with hockey all over again. I have no doubt that those guys will win a Cup one day, and when they do, I know they’ll remember all those mini-stick battles in the basement.”