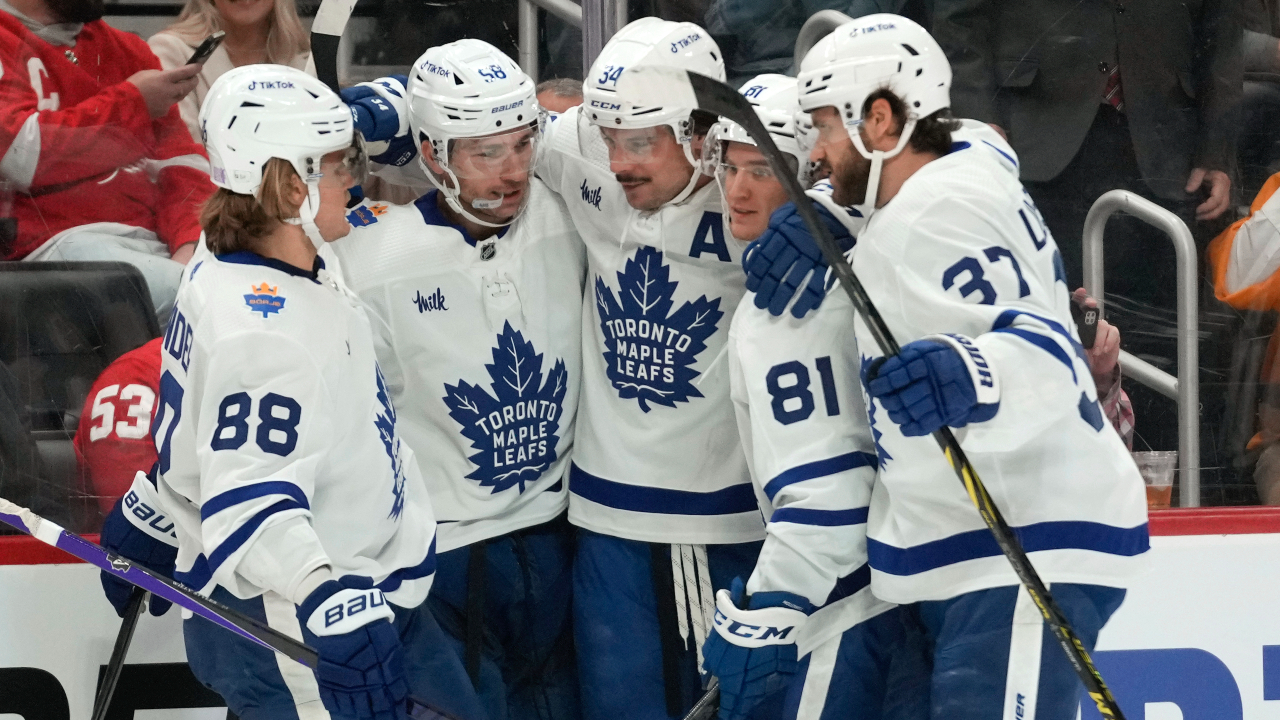 DETROIT — With their latest victory, the Toronto Maple Leafs completed a road-trip sweep, spoiled yet another team’s winning streak and saw Mitch Marner extend a remarkable run of his own.

It sure feels like everything is coming up Buds these days.

Marner scored to make it 17 straight with a point for No. 16, who can equal the all-time franchise mark with a point in his next contest. Auston Matthews hit the back of the net for the second time in as many games, while Matt Murray — who turned aside 42 pucks — was once again a strong, steadying presence in goal.

Toronto began this excursion by halting the New Jersey Devils’ 13-game winning streak last Wednesday. On Saturday they stopped a Pittsburgh Penguins team that had won five straight in its tracks, then dusted this Detroit squad that had claimed four consecutive victories before running into what’s become a bit of a Blue and White buzzsaw of late.

“It’s always fun to win, so we just want to keep it rolling,” Matthews said.

While this latest effort probably isn’t the template Toronto wants to use going forward — Detroit was very strong out of the gates and certainly had the bulk of the high-danger scoring chances — there was still plenty to like beyond the end result.

“Credit to Detroit, they came at us and made life hard on us to get out of our zone in particular,” said Toronto coach Sheldon Keefe. “But I thought our goaltending was outstanding again, as it has been all trip. And again — I thought we defended way too much because of our inability to break out — but, especially in periods two and three, we really didn’t give up the big chance.

“The guys did a good job of allowing Matt to see the puck and the way he’s playing, if he’s seeing it, he’s stopping it.”

Detroit did seize a 1-0 lead 4:45 into this game when Moritz Seider finally knocked home a loose puck the Wings got a handful of whacks at before getting it over the line.

A short time later, Rasmus Sandin was whistled for hooking Joseph Veleno. A goal could have sent the home side on its way, but Toronto killed it off and before the halfway point of the first frame, Matthews took a feed from Michael Bunting in the high slot and ripped a shot — the Leafs’ first of the night — over the glove hand of Ville Husso. Less than a minute later, with Toronto holding a man advantage, William Nylander jumped all over a rebound and roofed one under the bar.

With that, Toronto had a lead it would not relinquish thanks to a part of its game that wasn’t necessarily humming in their other recent wins coming through.

“The one thing that stands out for me in terms of why we got on the right side of this game — and it’s nice to see because it maybe wasn’t the case on the trip — is that special teams were really good,” Keefe said. “Penalty-kill was excellent, it gave us a lot of momentum and life in the first period. Come out of that [Sandin] kill, score right away and we got a power play and we scored right away there, too.”

The Leafs certainly didn’t waste any time extending their lead in the second stanza, as Marner took a feed from Mark Giordano and let one go that just squeaked through Husso.

“I wanted the puck back pretty badly there from ‘Gio’ — I was screaming pretty loud — and great vision by him just to kind of slow up, bring people to him and give it to me,” said Marner, who’s found the net in three straight games. “I just tried to come in with speed, go lateral and get it to the net quickly and lucky enough it went in.”

Not long after Marner made it a two-goal Toronto advantage, Murray made one of his best saves of the night on a point-blank drive by Dominik Kubalik. In the first frame, Murray stoned Veleno on a one-timer from just outside the crease. At this point, the Leafs have come to expect nothing less than that kind of puck-stopping from Murray, who has not sustained a regulation-time loss in six contests since returning from an adductor injury and has made 30-plus saves in five of those games.

“Same as usual, I feel like,” said Sandin when asked about Murray’s stellar play. “He’s playing great, makes huge saves. I think the Detroit played a lot better than us in the first period, especially, and he’s just throwing himself around there and making crazy saves.”


Streaming Home of the Toronto Maple Leafs. Stream the most games at the lowest price, plus hundreds of other NHL games, the All-Star Game and Stanley Cup Playoffs. SN NOW STANDARD and PREMIUM let you choose how much hockey you want to watch.
CHOOSE PLAN

While Murray was taking care of things at one end of the ice, Sandin found the net for Toronto’s fourth goal with a long, seeing-eye shot that sent prompted Detroit coach Derek Lalonde to yank Husso in favour of Alex Nedeljkovic just before the midway point. The score marked Sandin’s first goal of the season, just another positive note to go along with things like John Tavares recording his 300th point as a Maple Leaf, Nylander popping his seventh goal in his past eight games and Matthews registering two points to give him five in his past two outings.

And it isn’t just the big boys doing damage. Playing just his fourth career NHL contest, Mac Hollowell picked up his first big-league point on a wonderful play. The 24-year-old raced back to retrieve a loose puck, shook a defender and scooted the puck up ice to start the sequence that culminated with Matthews’ goal to get the Leafs on the board.

It was easy to sense how happy every teammate was for the five-foot-nine rookie who’s part of a defence corps that continues to gut it out in the absence of injured mainstays Morgan Rielly, T.J. Brodie and Jake Muzzin.

“The ‘Big Mac,’ he’s the man,” Matthews said with a huge grin. “He’s solid back there. I told him after the game, he’s undefeated in the NHL so far.”

Those are the kind of good vibes Toronto will carry home, where they’ll be gunning for a fifth straight win against the lowly San Jose Sharks on Wednesday.

“We’ve had a really good road trip,” Sandin said. “[We’re] going back to Toronto with lots of confidence and hopefully [we’ll] keep this going.”