HomeSport
By LordOfDailytimes on March 12, 2021 Sport 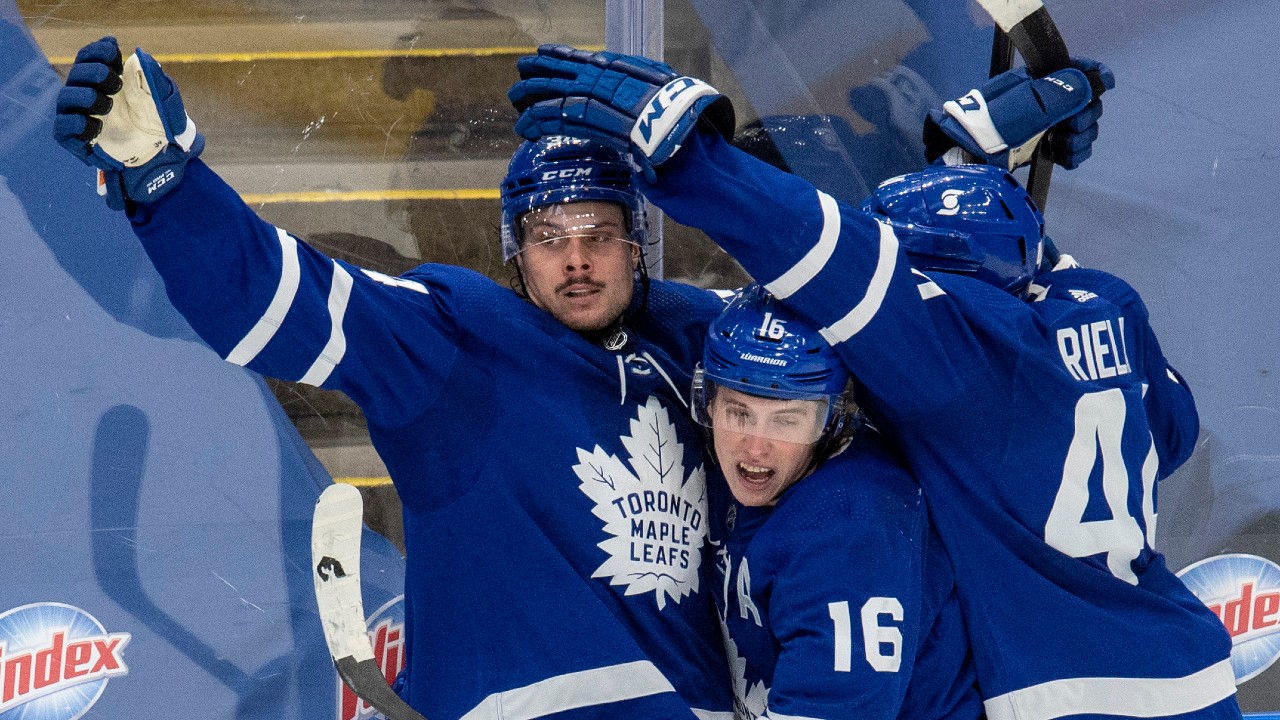 TORONTO — Auston Matthews scored his league-leading 21st goal of the season 59 seconds into overtime as the Toronto Maple Leafs defeated the Winnipeg Jets 4-3 on Thursday to snap a three-game losing streak.

Mitch Marner, William Nylander and Ilya Mikheyev had the goals in regulation for Toronto (19-7-2). Frederik Andersen made 23 saves for the North Division leaders. Matthews and Marner each added an assist.

Nikolaj Ehlers, with two goals and an assist, and Paul Stastny replied for Winnipeg (16-8-2). Connor Hellebuyck made 33 saves for the Jets.

Toronto, which had dropped three straight in regulation since sweeping a three-game series against the Oilers in Edmonton, got the winner in the extra period at the end of a long shift when Matthews took a pass from Morgan Rielly and roofed a backhand to seal it.

The Jets, who downed the Leafs 4-3 on Tuesday on the heels of a 7-1 blowout loss to the Montreal Canadiens, and Leafs will complete this three-game set Saturday back at Scotiabank Arena.

Mikheyev broke a 2-2 tie with 7:31 left in regulation with his fourth off an Alexander Kerfoot pass from behind Hellebuyck’s net with the Leafs pressing.

But the Jets got back even with Hellebuyck on the bench for an extra attack when Ehlers found Stastny on tip from the slot for his eighth with 2:26 remaining.

Joe Thornton had a chance to win it for Toronto with just over a minute left, but Hellebuyck robbed him with the glove.

Trailing 2-1 despite playing two pretty good periods, the Leafs finally got even at 6:31 of the third when Nylander, who had been denied on three terrific chances by Hellebuyck, fired in his 11th after a great individual effort from John Tavares.

Hellebuyck then used his stick to stop a puck off Nylander’s skate that was heading in with under 10 minutes to go in regulation.

Looking for a spark down 1-0 through 20 minutes, Leafs head coach Sheldon Keefe mixed up his lines, including shifting Zach Hyman to the top trio with Marner and Matthews.

That move paid off almost immediately as a grinding shift in the offensive zone with Hyman as the catalyst eventually produced a tap-in for Marner’s 12th off T.J. Brodie’s point shot that found its way through a maze of players.

Hellebuyck then robbed Hyman on a breakaway move to the backhand a few minutes later with the Leafs buzzing.

But the visitors restored their lead at 10:50 after Leafs defenceman Justin Holl got caught up ice in the offensive zone. Ehlers took a pass from Kyle Connor on the ensuing 2-on-1 and rifled his 13th upstairs on Andersen.

Toronto had a glorious chance to get even, but Hellebuyck stoned Nylander before the winger batted the rebound off the top of the crossbar.

The Jets netminder then denied Pierre Engvall on a short-handed break _ Toronto’s third of the night _ on a sequence that resulted in a hooking call.

But before the Leafs went on the power play, Hellebuyck once again stymied Nylander with the teams playing 4 on 4.

Matthews, who came in with 20 goals in 24 games despite dealing with a wrist/hand injury, saw a chance stopped by Hellebuyck in tight on Toronto’s man advantage.

The Leafs had a terrific opportunity to open the scoring less than two minutes into the first, but Hellebuyck was there to deny Nylander’s move to the backhand on a breakaway with his right pad.

Hellebuyck held the fort as Toronto pushed with a couple more good chances as the period wore before Ehlers put the Jets in front with 3:41 left when he picked the top corner off the rush on Andersen after Leafs defenceman Travis Dermott coughed the puck up in the neutral zone.

Notes: Thornton played the 1,652nd regular-season game of his career to tie Mark Recchi on the NHL’s all-time list. … The Jets were minus defenceman Nathan Beaulieu after he took a shot off his hand Tuesday. Logan Stanley dressed in his place. … Kenny Agostino made his Leafs debut. The 28-year-old winger’s last NHL game before Thursday was April 6, 2019, with the New Jersey Devils.