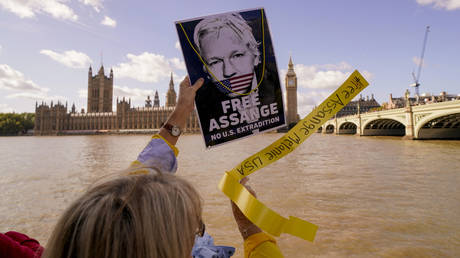 Five major news outlets, including the New York Times, have called on the Biden administration to drop charges against WikiLeaks founder Julian Assange. Obtaining and publishing “sensitive information,” they wrote, “is a core part of the daily work of journalists.”

The New York Times, The Guardian, Le Monde, Der Spiegel, and El Pais all published details from diplomatic cables obtained by WikiLeaks in 2010. These documents revealed that the US spied on its allies, undercounted civilian casualties in Iraq and Afghanistan, and waged a secret war in Yemen.

Assange has been detained in the UK since 2019, and is currently held in a maximum-security prison awaiting extradition to the US, where he is facing charges of espionage related to the publication of these cables, as well as a trove of documents alleging US war crimes in Iraq and Afghanistan.

“This indictment sets a dangerous precedent, and threatens to undermine America’s first amendment and the freedom of the press,” the outlets wrote on Monday. “Obtaining and disclosing sensitive information when necessary in the public interest is a core part of the daily work of journalists. If that work is criminalized, our public discourse and our democracies are made significantly weaker.”

“Twelve years after the publication of ‘Cablegate’, it is time for the US government to end its prosecution of Julian Assange for publishing secrets,” the letter concluded.

The Obama administration opted not to charge Assange, arguing that to do so would open all newspapers up to similar charges. However, former president Donald Trump’s CIA director, Mike Pompeo, declared WikiLeaks a “non-state hostile intelligence service” in 2017, and Assange was indicted by Trump’s Justice Department a year later.

Assange fell out of favor with the Democratic Party in late 2016, after WikiLeaks published emails revealing then-candidate Hillary Clinton’s mishandling of classified communications during her time as secretary of state, and implicated her in a party-wide plot to sideline popular contender Bernie Sanders. Clinton would go on to accuse Assange of working for Russia, without any evidence.

President Joe Biden has given no indication that he intends to drop the case against Assange. After a British judge ruled against the WikiLeaks founder’s removal to the US last year, Justice Department spokesman Marc Raimondi said that “we continue to seek his extradition.” UK Home Secretary Priti Patel went on to approve the extradition in June, after American authorities promised Assange would be treated humanely on US soil. Assange is currently appealing the decision.

LordOfDailytimes
Previous ArticleTwitter cracks down on radical Antifa-affiliated accounts
Next Article No Neymar? No problem, as Brazil edges Switzerland at World Cup