HomePolitics
By LordOfDailytimes on April 16, 2021 Politics 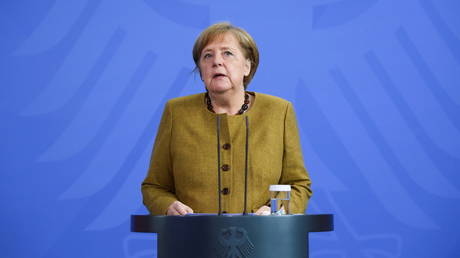 German Chancellor Angela Merkel has received her first dose of the AstraZeneca vaccine against Covid-19 just days after her government agreed a new age limit on the beleaguered jab over blood clot concerns.

The chancellor, 66, received the British-Swedish company’s jab on Friday in a vaccination center in Berlin’s former Tempelhof airport.

Government spokesman Steffen Seibert released a statement in which Merkel said she was “happy” to have received the jab, and thanked those involved in Germany’s vaccine rollout.

Merkel’s vaccination comes after government and state health ministers agreed on Tuesday that people under the age of 30 who have received their first dose of the AstraZeneca vaccine should receive a second dose of a different jab.

On March 30, Germany imposed a minimum age limit of 60 years for recipients of the Anglo-Swedish jab due to concerns over links to rare and potentially fatal blood clotting disorders.

The latest change means the under-60s in Germany who have received their first AstraZeneca vaccine will instead be offered the Moderna vaccine or that made by Pfizer-BioNTech.

Germany and a host of other countries have restricted the use of AstraZeneca’s vaccine after rare blood clotting disorders were reported in some people who received the jab.

Last week, the EU’s drugs regulator, the European Medicines Agency (EMA), announced the results of its review of 86 blood clotting cases from among the 25 million people to have received the vaccine in Europe.

The EMA said 18 cases had proved fatal and that unusual blood clots with low blood platelets should be listed as “very rare side effects” of the vaccine.

Merkel could be hoping that her vaccination will bolster German confidence in the AstraZeneca jab, which appears to have been stung by reports of the risk of blood clots.

A study by YouGov last month – conducted before the EMA’s announcement last week – revealed that only a third of Germans think the vaccine is safe, while 55% deem it unsafe.

This is a major decline from the results of another study by the British analytics firm, in which 43% said they believed the vaccine is safe, with 40% viewing it as unsafe.