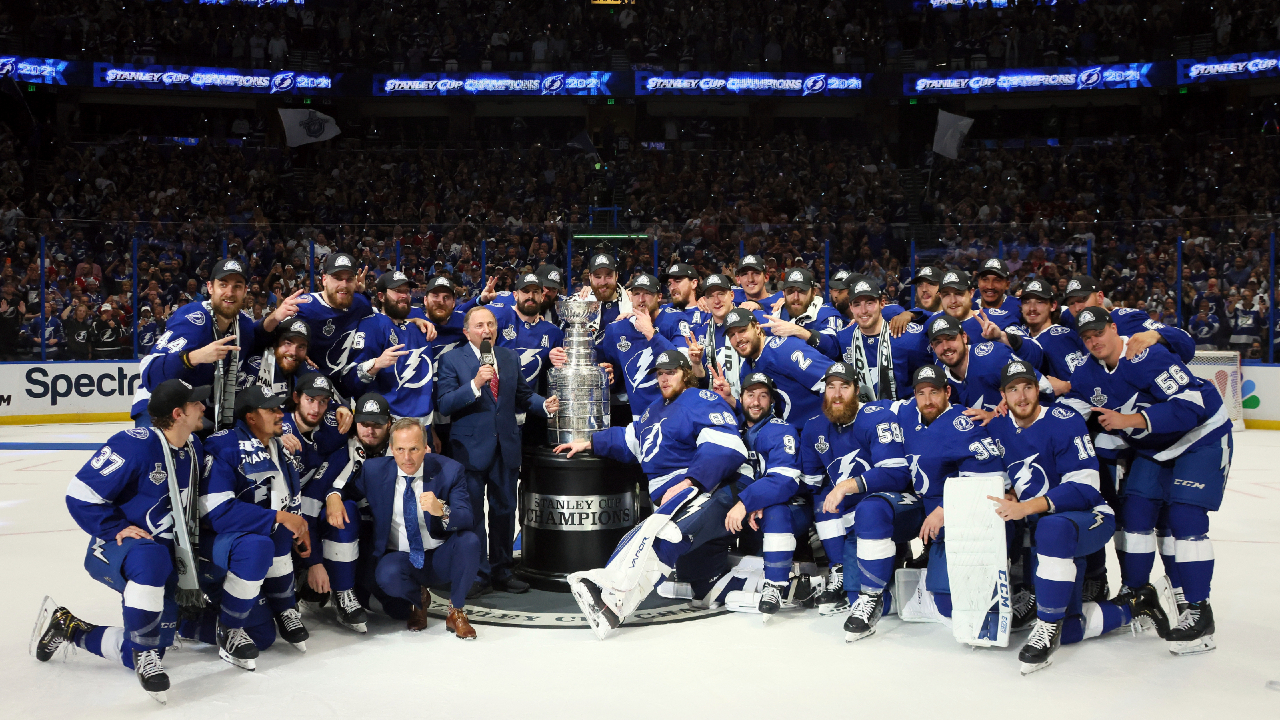 The start of a new NHL season is always so full of zeal.

This guy is in the best shape of his life. This other guy is a great breakout candidate. And, hey, your favourite team that underperformed last season is a great bet to bounce back. Everyone has playoff hopes, and maybe half the league believes it can win the Stanley Cup.

Our cup runneth over with positivity at this time of year.

So let me be the one to stir some negativity into the mix. It’s all about balance, people.

Our first in-season Power Rankings of the year are all about why your favourite team won’t win the Stanley Cup.

Back-to-back championships? We’ve seen it a few times in the past couple of decades. No big deal. Three Stanley Cups in a row? That’s an accomplishment from a bygone era, last achieved by the NY Islanders in the early-’80s. Ain’t happenin’ Tampa.

Most Sportsnet panellists (10 of 18) picked the Avalanche to win the Stanley Cup this year in our pre-season predictions. A kiss of death.

The Golden Knights may win the Pacific, maybe even the Western Conference or Presidents’ Trophy. But their power play was an issue last season, and goals seem to dry up for this team at exactly the wrong time in the playoffs. Maybe their Year 1 success comes into focus, over time, as a long-term playoff curse?

After back-to-back years of burning people for not believing in them, the Islanders are now becoming a popular pick to buy into — and not even as a hipster dark horse. But it’s not because you look at the team on paper and say “Aw ya, Stanley Cup winner for sure.” It’s because you’ve previously not believed in them and now approach it as “I don’t know how it works, but it works.” Time for the Isles to bust brackets for a different reason in 2021-22.

Lost their No. 1 defenceman and passed on signing their sensational rookie goalie, replacing him with a couple of injury-risk netminders. The net situation has burned the Canes before and we’re not sure they’re better off in 2021-22 than they were in 2020-21.

Being “Canada’s best team” only caps your ceiling at Stanley Cup finalist.

All nice and good that the Panthers have added to their team, looking intimidating on paper, and are a popular “non-traditional” Stanley Cup pick (qualifying as a bold prediction here) this season. But this franchise hasn’t won a single playoff round in 25 years. You don’t go from that to champion. Ain’t. Happenin’.

Haven’t you heard? The Metropolitan Division is full of has-beens and rebuilds too young to do anything of consequence. It only matters that Alex Ovechkin keeps piling up goals and one day soon chases down Wayne Gretzky’s record.

We’ve been conditioned to just not doubt this team in recent years, but they’re trending in the wrong direction with their finishes the past two years. The Bruins may not be in the top tier of their own division anymore and they’re over the hill has a contender.

Way too many questions about the blue line — and if the 39-year-old goalie (40 in March) can replicate an anomalous season — for a team that has fallen short of expectations in recent playoffs because of its defence. Five years left on that McDavid deal…tick tock.

We can be sure that at some point along the way, in the middle of a hot streak, a parade will be planned. Happens every year, you know. But the Leafs can’t win the Stanley Cup. The universe won’t allow it to happen.

They had to play through one of the toughest schedules last season, missed key players (Tyler Seguin, Alexander Radulov) for huge portions, and still almost made the playoffs. And they may get back there! But now Radulov is 35, Joe Pavelski 37 and age is catching up to them. And with Ben Bishop still not healthy, the goaltending picture is wobbly.

No Crosby or Malkin to start, goaltending consistency issues and not a heck of a lot in the way of futures to trade for upgrades (and would that be wise right now anyway?). We’ve been fooled by the “end of an era” with the Penguins before, when they went six years without winning, but this feels permanent. It’s been three years since they even won a playoff round.

“Magical” would have described last season’s run to the Stanley Cup Final, bucking the odds and blowing up brackets. Losing Shea Weber will sting, especially when the playoffs hit again. All the world is made of faith, and trust, and pixie dust — and the Habs are fresh outta pixie dust.

What a treat last season was. Kirill Kaprizov took the league by storm and the Wild were actually an exciting team to watch for a change. But, the fact remains this is a mushy middle team, a place the Wild are very familiar with. They’ll just be more fun to see settle in the middle now.

There’s no guarantee the Rangers will keep progressing without any hiccups and it’s worth remembering they were 12-16-4 against Pittsburgh, Philadelphia, Washington and the NY Islanders last season — four of the five teams they’ll probably have to beat out for a playoff spot (Carolina is the other). There’s a realistic chance the Rangers could get to the playoffs. The Cup? Hopefully it doesn’t take 54 years this time.

Be honest Canucks fans: You don’t even believe they have a shot at the Cup.

Good looking team on the rise, but finished 27th in scoring last season and added Phillip Danault (a defensive specialist) and Viktor Arvidsson (a goal scorer in decline for two years) as their major pickups. Only one NHL team last season finished in the bottom-10 in goals, bottom 10 in shots against and made the playoffs: Nashville. And I’m not sure you want to be grouped with that team these days.

Well, they’ve been in and out of the playoffs on rotation for 10 years, so maybe we’ll give them a post-season spot. Off-season changes needed to be made — and were — but it feels awfully similar.

Not even Vegas won the Stanley Cup as an expansion team. No chance.

We’ve got one disgruntled former star who wants out, a goalie who started his career hot and has been trending down ever since, a blue line that lost its most important piece over a year ago and didn’t recover, and a GM with one eye on Canada’s Olympic team. The Blues weren’t even great for the entire 2018-19 season when they did win the Cup — they caught fire at the right time after a 15-18-4 start, went 30-11-5 the rest of the way, and never looked back. Ever since? Zero series wins and just two playoff game wins. Maybe they are who we thought they were in 2018?

Had Juuse Saros not led a Herculean effort in the back end of last season the Predators may have missed the playoffs and changed a whole heck of a lot more than they did over the summer. The Central Division is packed with potential and so not only are the Predators far removed from Cup contender status, they may end up closer to the basement — Arizona feels like the only team that will definitely finish below them from the group.

It’d be an awful lot to ask of this team to go all the way to the Stanley Cup. The Devils added a big piece in Dougie Hamilton and there is reason to be optimistic of the team’s future. So let me be the bringer of devastating pessimism, then: New Jersey isn’t even the best team emerging out of a rebuild in their own division.

Fans would like for the word “contender” to describe this year’s Flames, but “teetering” seems to be a better fit. Another whiff and Calgary might be closer to a rebuild than anything else.

Banking on another age-defying season from Marc-Andre Fleury is risky enough (and maybe he does it) — but asking that of him behind one of the worst defensive groups from last season really strains reasonable expectations.

Woah, woah, woah, before we start talking about winning the Stanley Cup, maybe let’s get Brady Tkachuk signed first. If that happens, then we can talk about the Sens being a plucky team that’s hard to play against — and how they have the upside for sixth place in the Atlantic.

Centre is vital to success in this league and it is a massive question who the Blue Jackets will use in those roles, and how long they’ll stay there. The Metro Division is a collection of teams with either legit Cup hopes, recent success that lingers, or a clear arrow pointing up. And then the Blue Jackets underneath it all.

“It’s still in there. It didn’t go anywhere.” | After dreadful first season in Columbus, #CBJ Patrik Laine wants to restore luster as one of the #NHL’s top offensive talents

Winger has drawn rave reviews for his conditioning and attitude in training camphttps://t.co/IXDx5lQsDC pic.twitter.com/Km8rIu7FC7

Tomas Hertl doesn’t seem keen on sticking around and he’s in line to become a trade candidate this season, which is unfortunate because he’d be a key player for them to move forward with. There is star potential with this roster, but it’s been a while since it’s all come together. Goaltending has been a serious weakness on this team for a few years now — James Reimer and Adin Hill save them bucks on the position, but the results may not be improved enough to make a difference.

Going through a long rebuild, there aren’t a ton of high impact players here to begin with, so when you lose one of your breakout candidates like Jakub Vrana — (out four months at least) — it’ll make that uphill climb even more steep. Not being out of the playoff race by the Olympic break would be an achievement.

Stanley Cup? Playoffs aren’t even happening. When the No. 1 thing you’re looking forward to in a season is to see how the rookies do, or how the other youngsters improve, your Cup hopes don’t exist.

Arena questions are coming up again and it seems all but certain that Phil Kessel will get traded, following a lot of other vets moving in the off-season. Seems like the off-ice stories will be more relevant to the Coyotes again this season than wins and points. Wish it didn’t have to be this way, but here we are.