HomePolitics
By LordOfDailytimes on January 14, 2022 Politics 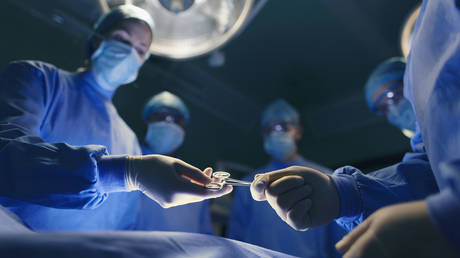 Being a bad person doesn’t disqualify you from receiving healthcare, many pointed out

The New York Times upset some of its reader, with a report bluntly stating that the subject of experimental heart surgery had once maimed somebody. The victim’s family didn’t think the man deserved a second chance to live.

The Gray Lady faced plenty of pushback from its readers after publishing a story on Thursday titled ‘Patient in Groundbreaking Heart Transplant Has a Violent Criminal Record’. The patient in question was David Bennett Sr., a Maryland man who had received a life-saving experimental transplant of a heart from a genetically modified pig.

The procedure is indeed groundbreaking, and may pave the way to solving the persistent shortage of transplant organs, which currently keeps ailing patients on waiting lists, forces doctors and ethics experts to decide who qualifies to receive one, and leads to gruesome criminality such as the black market for donor organs.

The Times story and that of the Washington Post, which was the first to report Bennett’s criminal past, explore the moral aspects of choosing who gets to undergo a lifesaving procedure. Bennett was denied a human heart due to his medical history, including his propensity not to take prescribed medicines or attend follow-up appointments. The cutting-edge pig heart transplantation was therefore his only chance to prolong his life.

But the family of a man named Edward Shumaker feel Bennett didn’t deserve that chance because of the misery he inflicted on them. In 1988, he assaulted Shumaker with a knife in an apparent dispute over the affections of Bennett’s then-wife. The victim was paralyzed in the attack.

Life for Shumaker and his loved ones thereafter was “pure hell,” his sister told the Post. He spent 19 years confined to a wheelchair before dying in 2007. His youngest brother was ridden with guilt over what had happened to him. He became addicted to opioids and died from an overdose a decade after the assault, aged just 28.

Bennett was tried for the assault and sentenced to 10 years in prison. Shumaker’s family said he had failed to pay either a court-ordered restitution or the compensation they had won from him in a civil lawsuit.

After getting out of prison, Bennett “went on and lived a good life. Now he gets a second chance with a new heart – but I wish, in my opinion, it had gone to a deserving recipient,” the sister said.

That tragedy, painful as it was, would have been irrelevant for those deciding his eligibility for surgery. Medical ethics mandate that only the patient’s health should be taken into consideration. “We are not in the business of sorting sinners from saints. Crime is a legal matter,” Arthur Caplan, a bioethics professor at New York University, told the Post.

LordOfDailytimes
Previous ArticleNFL wildcard playoff picks: Favorites to sweep first ever six-game slate
Next Article Afghan suspected of raping & murdering 13yo to be moved from UK to Austria