HomePolitics
By LordOfDailytimes on June 2, 2021 Politics 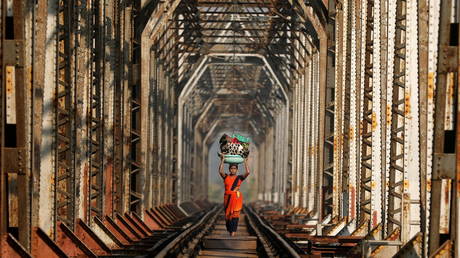 More than 8,700 people died after being struck by trains in India in 2020 despite the country’s railways almost entirely shutting down passenger services amid the coronavirus pandemic and mainly running freighters.

The country’s Railway Board released police data on the fatalities recorded between January and December last year after a request from an activist under freedom of information legislation. These deaths fell under the jurisdiction of the police as they were viewed as “untoward incidents” or “trespassing,” rather than “railway accidents.”

A total of 8,733 people were killed over the 12 months, with 805 others injured, the board said on Wednesday.

Unnamed officials later told the Press Trust of India that many of those killed were migrant workers. Millions of Indians who had traveled to big cities in search of jobs have been returning to their villages en masse since lockdown was introduced in the country last March, leaving them without an opportunity to earn money.

Many walked home along the train tracks because they considered it a shorter route compared to roads or highways, and likely also thought it would prevent them from getting lost or encountering the police looking for Covid-19 curb violators, the officials added.

“They also assumed that no trains would be running because of the lockdown,” one of the officials surmised.

The figures from last year are much smaller, but they’re still significant considering passenger services were shut down almost entirely around the country in 2020 to prevent the spread of the infection, with only freight trains continuing their operations.

Indian Railways, which operates the fourth-largest train network in the world spanning some 67,956km, has been campaigning to reduce the number of deaths and deter people from trespassing onto tracks. Other safety measures unrolled include the elimination of unmanned crossings and the modernization of signaling equipment, according to the Times of India.