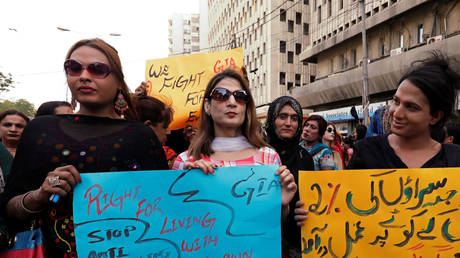 Pakistan has opened its first protection center for transgender people in the capital city of Islamabad, in a ceremony attended by Federal Minister for Human Rights Dr. Shireen Mazari, who promised to open more.

Speaking at the inauguration on Wednesday, Mazari said that the country must do more to ensure the rights and opportunities of Pakistan’s transgender people. “The transgender community should be provided the same employment and health rights as other citizens of Pakistan are granted,” the minister said.

She said that the new center in Islamabad would provide transgender people with legal aid, basic health facilities, psychological counseling, and temporary shelter for the community’s most needy.

The transgender community has been included within Pakistan’s strategy to alleviate poverty and healthcare initiatives, Mazari stated, adding that she hoped this project would open up new opportunities.

The new center will also carry out activities within the wider community to promote awareness about transgender people and their plight in Pakistan. Mazari vowed that more centers, like the one in the capital, would be opened up around the country.

Transgender people are often considered outcasts in the notoriously conservative Pakistan. The government has sought to respond and in 2018 passed a law legally recognizing transgender people with the ratification of the Transgender Persons (Protection of Rights) Act.

In July 2021, the government opened its first school for transgender students in the city of Multan, Punjab province.

Last year, a group of transgender women were attacked by a gunman as they returned home after performing at a wedding function on the outskirts of Peshawar. One died from their injuries, while another was wounded.