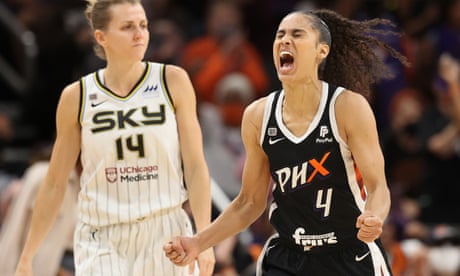 Brittney Griner dunked while scoring 29 points, Diana Taurasi had eight of her 20 points in overtime and the Phoenix Mercury evened the WNBA finals with a 91-86 win over the Chicago Sky on Wednesday night in Game 2.

Griner kept the Mercury within reach of Chicago during a sluggish start and brought the Phoenix Suns players sitting courtside to their feet with her second career playoff dunk in the first quarter. She scored on a turnaround jump to help give Phoenix a late four-point lead in regulation, but just missed blocking Courtney Vandersloot’s tying layup with 4.4 seconds left.