HomePolitics
By LordOfDailytimes on January 19, 2023 Politics 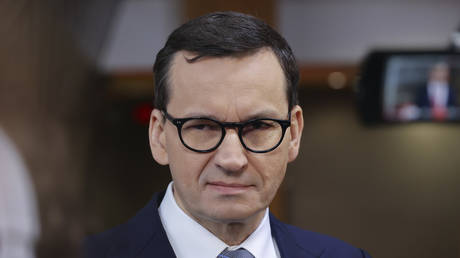 Warsaw is pressuring Berlin to allow it to supply German-made Leopard 2 main battle tanks to Ukraine but does not consider its consent essential, Polish Prime Minister Mateusz Morawiecki has said.

“Consent is a secondary issue,” he told Polsat television on Wednesday evening. Warsaw expects to get Berlin’s permission quickly, but could also “do the right thing on our own,” he added.

Poland has offered 14 Leopard 2 tanks to Kiev and wants other Western nations, including Finland, Denmark and France, to contribute, so Ukraine could get a batch of up to 100 tanks. Morawiecki said replenishing the Ukrainian armor fleet was urgent, because Russia could “probably” launch an offensive as early as February, he added, citing “various” expert opinions.

The Polish leader accused Germany of having been among the “least proactive” European nations in terms of arming Ukraine with tanks. Berlin reportedly wants the US to lead by example before it would be comfortable about allowing German-made armor into Kiev.

Washington has so far declined to provide its M1 Abrams tanks to Ukraine. US officials believe that Kiev would have a hard time benefiting from them due to their demanding maintenance and time required to train crews, according to media reports.

The Ukraine Defense Contact Group, which includes Western sponsors of Kiev, is to meet at Ramstein US air base in Germany on Friday to discuss further military assistance.

In the interview, Morawiecki also expressed concerns about Germany’s new Defense Minister Boris Pistorius due to his ties with former chancellor Gerhard Schroeder. The Polish prime minister stated he was willing to give the man, who took office this week, the benefit of the doubt.

Pistorius had a six-year-long relationship with fellow politician and journalist Doris Schroeder-Koepf, which ended amicably last year, according to the German press. She was the wife of Schroeder, from whom she separated in 2015 and divorced in 2018.

Both Schroeder and his ex-wife have been criticized for their links with Moscow. Schroeder-Koepf has denounced the Russian military campaign against Ukraine.