HomeSport
By LordOfDailytimes on May 29, 2022 Sport 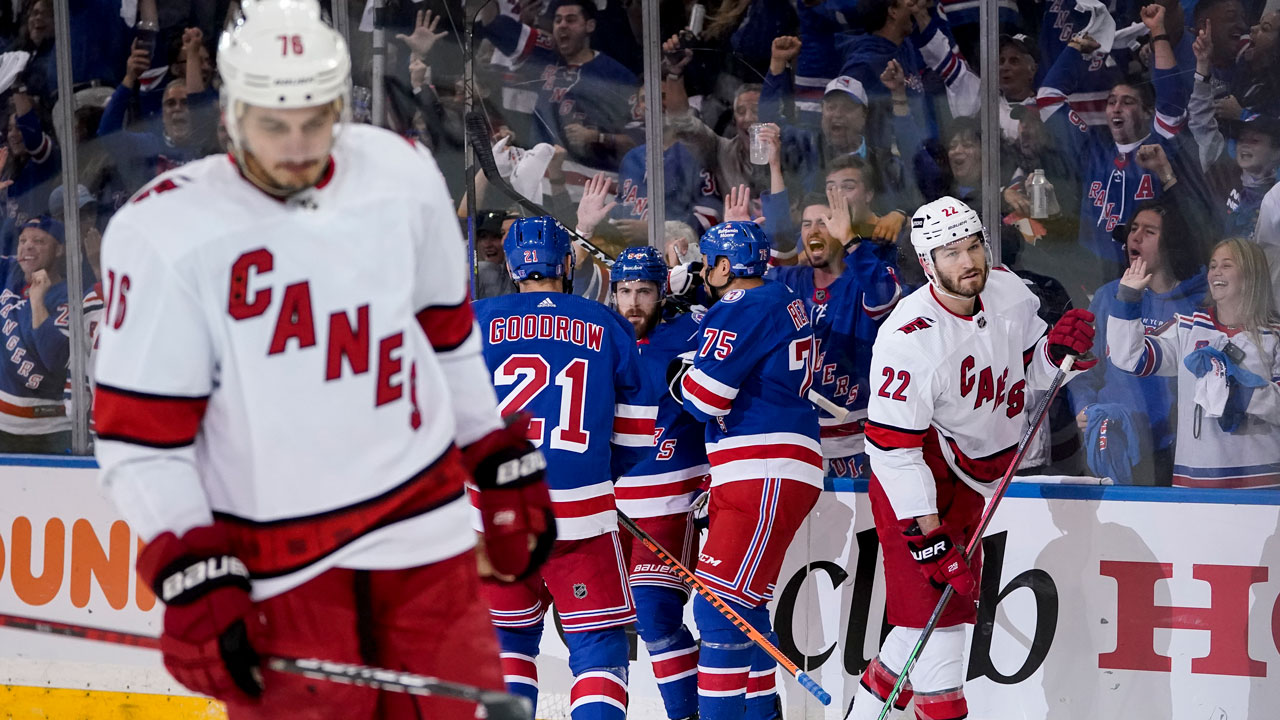 The Carolina Hurricanes aren’t going to have to win a road game to get to the Stanley Cup Final, but they sure aren’t doing themselves any favours by making the path there as long and winding as it can be.

In dropping Game 6 to New York 5-2 at Madison Square Garden, the Hurricanes are now 0-for-6 in away games these playoffs, becoming the first team in post-season history to start so poorly in road matches.

Their home/road splits are eye-popping. While the Metropolitan Division champs average 3.57 goals for and 1.14 goals against at home, they are an entirely different version of themselves away from PNC Arena. In Boston and New York these playoffs, the Canes have averaged just 1.67 goals for and a sky-high 4.33 goals against.

The Hurricanes in Carolina, the Rather Blustery Days everywhere else. It’s one of the most confusing conundrums of these playoffs for a team that was tied for the most road wins in the regular season.

With a chance to close out the Rangers and have three days to rest and prepare for a Wednesday opener in Round 3 against Tampa Bay, the Hurricanes started well enough. They outshot the Rangers 8-2 early in the first period, had momentum on their side, and a glorious opportunity to open the scoring when Sebastian Aho sprinted to a breakaway.

But playoff momentum can be a precarious thing and one important play often swings it in wild directions. Enter New York’s most important game breaker Igor Shesterkin, whose save in that moment may have been one of the most important plays of the game.

Less than 20 seconds after this save, Tyler Motte opened the scoring on a long-range squeaker against Antti Raanta. A couple of minutes after that, Mika Zibanejad scored a power-play marker on a beautiful individual effort that extended his goals streak to four games, but again, it was a shot Raanta should have had, and the sort of softy Shesterkin wasn’t surrendering at the other end. It was a sign of things to come and the main narrative of Game 6 — the stark difference in goaltending was the reason why this is heading back to Carolina for the only Game 7 of Round 2.

“That’s him,” Rangers coach Gerard Gallant said of his goalie. “He plays his best hockey when we give up a couple of breakaways in the first period and he’s done it all year long. Makes me a little nervous, but he gets into the game and he focuses and he makes those key saves for us. It’s not a surprise for us, but fortunately for us he makes those saves at key times and that gave us a 2-0 lead and a lot of confidence after the first period.”

While Raanta was pulled for rookie Pyotr Kochetkov after the Rangers made it 3-0 early in the second period, Shesterkin was all over the place in Game 6, his stop on Aho just the tip of the iceberg to his offerings. When the Canes pushed back, Shesterkin made big save after big save, ending the night with 37 stops. He became the fifth goalie in Stanley Cup Playoffs history to record two assists in a game and he even logged an interference penalty that stopped play when the Rangers were hemmed in their end with exhausted players stuck on the ice.

What more could you want from your starting netminder?

“It’s always great to have a goalie whose next step is only to just start scoring goals,” Panarin joked through a translator.

Shesterkin, however, wasn’t the first star in this game, an honour that went to 22-year-old Filip Chytil. The 21st overall pick from 2017 who has had a few years of slow, sometimes frustrating, development in New York was reunited on the kid line with Alexis Lafreniere and Kaapo Kakko and though they were outchanced by their competition in the highest-quality scoring areas of the ice, the trio outscored their opponents by a couple and Chytil scored the two back breakers.

His first marker chased Raanta to make the game 3-0 and seemingly out of reach for Carolina. But the Canes pushed back, made it 3-1, and in a playoff year where insane comebacks have been almost expected, Carolina had another chance here to claw back in. But less than two minutes after the Hurricanes’ first goal when they were trying to pull back some of that momentum, Chytil scored another off a beautiful play in which he outmuscled Brendan Smith in the corner for the puck, and then roofed an absolutely beautiful backhander over Kochetkov.

Artemi Panarin was a factor as well, scoring his first goal since the Round 1 series clincher against Pittsburgh and finishing with one of his more sustained, well-rounded efforts of Round 2. Zibanejad moved into a tie for third in playoff scoring across the league, and all of the support players up front showed out for New York — with Motte scoring the opener, Andrew Copp contributing five shots, Ryan Reaves throwing his weight around in limited minutes and Frank Vatrano with the best Corsi numbers on the team.

For most of the night, the Hurricanes were noticeably not themselves, out of sync, breaking down defensively at times, playing as the slower team and continuing to struggle on the penalty kill. Their top-ranked regular season PK (88 per cent) is a middling 76.6 per cent in the playoffs. And like everything else, most of that has to do with Carolina’s softer play on the road — they have killed off nearly 90 per cent of their post-season penalties at home, but are under 68 per cent on the road.

“It’s frustrating we couldn’t close it out,” said Canes defenceman Brady Skjei. “We’ll try and move on from this pretty quickly. We have a lot of confidence at home, like our record shows. We’re excited and we’ll be ready to go Monday.”

Now this series turns back to Carolina, where you think the pattern of things will favour the Hurricanes, who are unbeaten on home ice in these playoffs. The Rangers, however, have now won four straight elimination games after trailing the Penguins 3-1 in Round 1 and coming all the way back to take them down. New York’s top players are shining, their depth players contributing, and their ace in net has a .949 save percentage this series.

“That should be a battle,” Gallant said.

Whoever emerges victorious on Monday night will have a single off day before facing the back-to-back champs in Game 1 of the East Final on Wednesday, where the Lightning will be waiting with the benefit of nine days of rest.

If the Rangers win, we’ll move on to a series that will pit two of the best playoff goalies against one another with Shesterkin facing down Vasilevskiy, countering the highly anticipated Nathan MacKinnon-Connor McDavid showdown on the other side of the bracket. If the Canes pull it out, it will be their first appearance in Round 3 since they were swept by Boston in 2019, and as Frederik Andersen practised this week, perhaps they could look forward to their starting goalie’s return.