HomeSport
By LordOfDailytimes on October 17, 2021 Sport 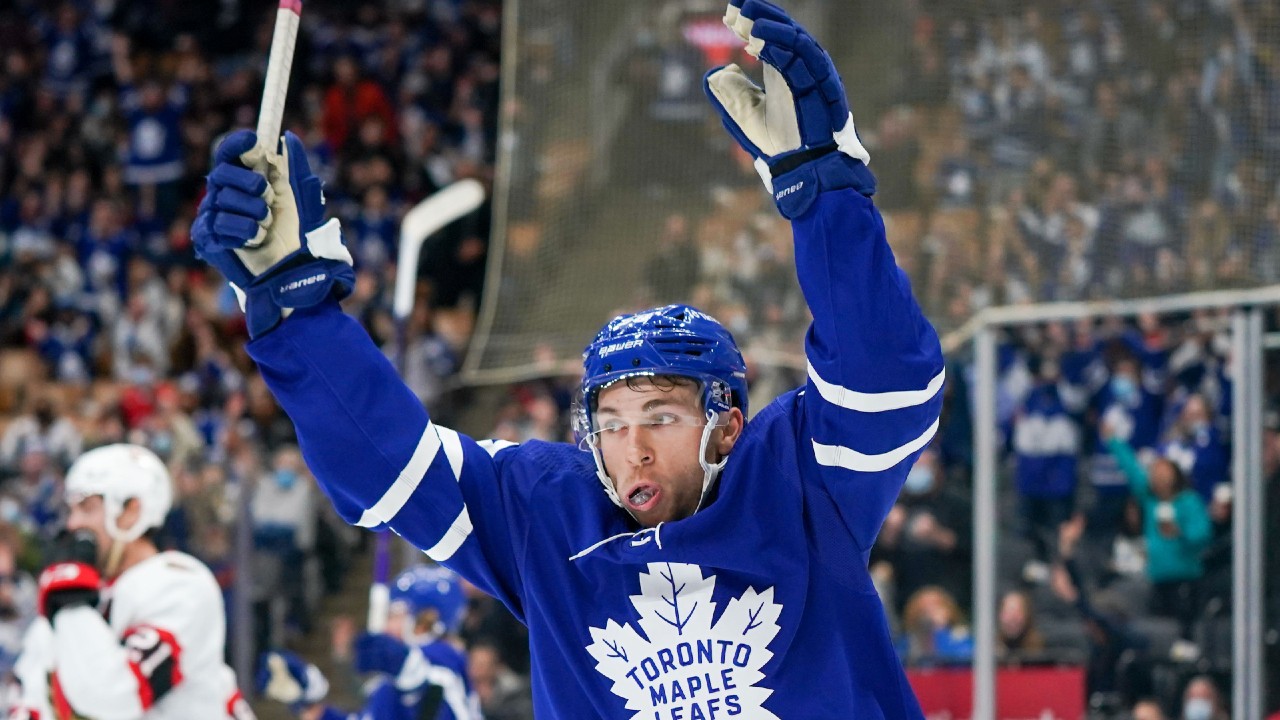 TORONTO — The newest goal-scorer for the Toronto Maple Leafs glided toward the end-boards and a sea of happy faces.

A red lamp reflected off his face and Hall & Oates blared through the barn of his favourite boyhood team as Michael Bunting pounded the glass with his fists.

Or once for every big goal scored by a scrappy Scarborough son in the Leafs’ decisive 3-1 victory over the Ottawa Senators Saturday night.

“I’m pretty much speechless. It was a pretty cool experience to look up and see all those Maple Leaf jerseys in the crowd and cheering,” said Bunting, still riding a high.

“And they’re cheering for me. For a kid growing up in Scarborough, it’s a dream come true.”

The Scarborough Maple Leafs started on time and were rewarded for their punctuality.

Voice-of-reason Jason Spezza had cautioned outsiders not to make “too big a deal” of the club’s sluggish starts in their first two games. And the players quieted criticism of that disturbing early trend with quick strikes from two forwards who had underdelivered through the first 120 minutes of the season.

Simmonds went from “hugging” young daughter Kori through the corner glass during warmups to hugging his fourth-line mates by the 2:12 mark.

The Scarborough native battled for space net-front and converted a sweet slot feed from defenceman Rasmus Sandin, creating deep in the enemy zone.

“Unbelievable. I didn’t do anything,” Simmonds said.

Six minutes later, Alexander Kerfoot — elevated to second-line centre until Auston Matthews is ready — got open in the slot and slammed home on a puck on a platter from winger William Nylander.

Kerfoot himself stated pre-game that his line could do better, and the trio made good on that effort.

Sheldon Keefe likes Kerfoot’s knack for adapting to whatever role he is given, but the coach felt the need to chat with Kerfoot after he failed to make a significant impact in his first two games in the top six.

The message: Let’s forget those first two games and treat Game 3 as if it’s Game 1 of your season.

Kerfoot had excelled in the post-season alongside Nylander when John Tavares got sidelined. Until Saturday? Not so much. Keefe asked for a return to the form Kerfoot had flexed in May.

“He played with lots of confidence, he wanted the puck, he was looking to make plays, he was flying through the neutral zone. We haven’t seen that here quite yet,” Keefe said pre-game.

“(My message) was just about him finding his groove and finding his confidence and getting back to doing that. I wanted to clear his head and get (him) back to being the player we know he can be.”

A more energized and determined Leafs group washed away the sour taste of Thursday’s loss in Kanata and, perhaps best of all, skirted the potential embarrassment of playing University of Toronto emergency backup goalie Alex Bishop.

“You’re going to see a lot of this throughout the league. In fact, Colorado’s playing one skater short tonight as well,” Keefe said. “Lucky for us, we didn’t need it.”

Ottawa’s Josh Norris got the Sens on the board in the second period with a power-play marker, and the Leafs dodged a tie game by about four inches when a Drake Batherson goal was erased due to an offside skate blade.

Bunting put the contest away when he wristed his keepsake puck past Anton Forsberg. Playoff Kerfoot set the new guy up during a two-on-one rush.

Bunting punctuated his first as a Maple Leaf with a smile as stretched out as Kingston Road and a happy bang into the end glass.

“Whether he’s scoring or not, he’s competing at a very high level. He’s engaged in the game. He’s engaged in every shift,” Keefe praised. “It’s apparent he’s putting himself out there. He’s not afraid to go to the areas where the goals are more likely to happen. He’s in the fight.”

Scarborough alone scored enough to get the job done.

“The lifestyle growing up there,” Bunting said, “you grind to get what you get.”

The Maple Leafs need more of that.

Truth is, were it not for the stellar play of Ottawa netminder Forsberg, who made jaw-dropping saves on Tavares and Mitch Marner all alone, Toronto might’ve run away with this one.

But a strong start — and Bunting’s joyous finish — did the trick.

Jack Campbell, Toronto’s only pro goaltender dressed, took the victory to improve to 2-0. He has only allowed two goals through 140 minutes of work and, with Petr Mrazek out with a groin injury for the next 14 days, faces a busy stretch ahead.

No doubt, Scarborough will be in the house.

“We got such a tight community in Scarborough,” Simmonds said. “We always look out for each other, so we’ve got a nice, tight network — and it’s nice to have another guy on the team from Scarborough, that’s for sure.”

Even nicer to have another Leaf willing to grind for what he gets.

• Matthews (wrist) was ruled out for three games. Three games are over. The superstar keeps participating in practices and his recovery is progressing well. Yet the Maple Leafs are not placing a date on his return.

“He’s feeling good,” Keefe said. “When I talked to him today, it was very positive.”

• Ottawa’s Brady Tkachuk practised in Toronto but has yet to make his season debut. “If it was up to him, he’d play. But my job is protecting him,” Sens coach D.J. Smith said.

Does Tkachuk play Sunday versus Dallas or wait till Thursday versus San Jose?

Smith: “It’s like waiting for Christmas when you already know what gift you’re getting.”

• Bishop is not the first University of Toronto netminder to get a peek into an EBUG’s life. Back in October 2013, an injury to James Reimer forced Toronto to sign Blues’ goalie — and noted Montreal Canadiens fan — Brett Willows to a one-day amateur contract and back up Jonathan Bernier.

Alex Bishop couldn’t fall asleep for his pregame nap so he studied for Tuesday’s midterm instead.

• Trend watch: Nylander has either a goal or a primary assist in each game. Bunting has drawn a penalty in all three games.

“Guys are annoyed when they play against him,” Kerfoot said, “so that’s good for our team.”