HomePolitics
By LordOfDailytimes on April 2, 2020 Politics 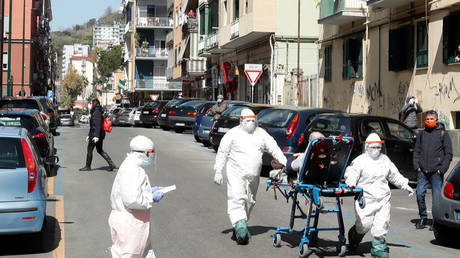 EU Commission chief apologized to Italy for the bloc’s sloppy coronavirus response, pledging €100 billion to help one of the worst-hit nations. Yet the help might never arrive, as mutualizing debt is opposed by EU fat cats.

“Today Europe is mobilizing alongside Italy. Unfortunately, this has not always been the case,” Ursula von der Leyen said in a letter published by Italy’s La Repubblica newspaper on Thursday.

After apologizing for the inaction, however, the EU Commission chief proceeded to praising the ‘help’ provided to Italy by the bloc’s members. “In the past month, the European Commission has left no stone unturned to help Italy,” she insisted.

The apology left Italian politicians unimpressed, as they urged the EU not only to talk, but to prove it is actually a union. Apparently, Rome did not notice the ‘help’ von der Leyen bragged about.

“I believe that everyone will eventually realize even in those countries that a shared, orderly, strong and rapid European response is the only solution,” Italian Prime Minister Giuseppe Conte told the Spanish television La Sexta . “A slow response would be a useless response.”

A similar response came from Matteo Salvini, head of the opposition League, Italy’s most popular political party. He took to Twitter to mock the apology from the EU bigwig.

Later in the day, Von der Leyen apparently tried to add some actual substance to the apology, rolling out an idea of a new financial package to subsidize the salaries at companies struggling with the coronavirus fallout. The scheme, dubbed SURE, would provide a total of €100 billion ($109 billion) in loans to EU member states to prevent massive lay-offs.

The EU Commission would take loans at the international financial markets and then lend funds to the bloc’s members, particularly to those with already damaged economies. Still, the EU would need a €25 billion ($27 billion) guarantee from all the members for the scheme.

To actually get implemented, the plan has to be approved by all the EU member states – and one cannot be entirely ‘SURE’ about it getting through. Last week, the EU nations already clashed over a similar idea of issuing eurobonds – sometimes referred to as “coronabonds” – EU-backed debt to help member states out of recession and increase spending on healthcare.

The coronabonds idea has been supported by the countries affected the most by the virus, namely Italy, Spain and France. More well-to-do members of the bloc including Germany and the Netherlands have strongly opposed the idea of issuing bonds together with the badly indebted nations.

Italy and Spain were offered to use European Stability Mechanism that grants conditional financial assistance to countries in dire financial straits, to which Salvini responded that he doesn’t want the Germans and the Dutch to “come to demand money from our children,” later, calling the ESM a “mortgage on the future of Italians.”

LordOfDailytimes
Previous ArticlePeople Are Recreating Famous Artworks With Whatever They Have And It’s AMAZING
Next Article Oilers greats McDavid, Gretzky open up in ‘epic conversation’