HomePolitics
By LordOfDailytimes on March 29, 2020 Politics 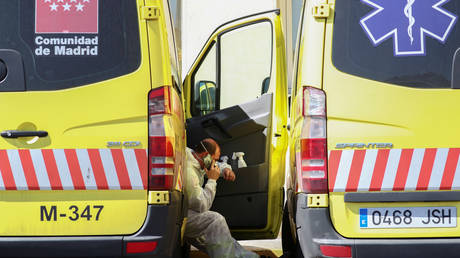 Spain recorded another record day of fatalities from Covid-19 on Sunday as 838 people died. However, the rate of new cases dropped significantly amid signs that measures introduced to combat the virus are having an effect.

Spanish health officials announced on Sunday morning that 6,528 people have now died from the coronavirus in the Mediterranean country and a total of 78,797 people have contracted the illness.

The figure represents an increase of 6,549 confirmed cases on Saturday’s total, a jump of 9 percent. This compares favorably to 12.7 percent on Saturday, 14 percent on Friday, Thursday’s 18 percent surge and a massive 20 percent spike on Wednesday.

The continued decrease in the rate of new people getting infected with the illness suggests that strict measures introduced by Spanish authorities on March 14 are curbing the spread of the virus.

The nationwide lockdown is set to remain in place until at least 9 April. Spain has the world’s second-highest death toll after Italy. It was recorded over twice as many deaths as China, where the outbreak began late last year.

LordOfDailytimes
Previous ArticleGermany’s health system could buckle if faced with crisis seen in Italy, public health chief warns
Next Article Fashion Brands Are Letting WHO Take Over Their Instagrams