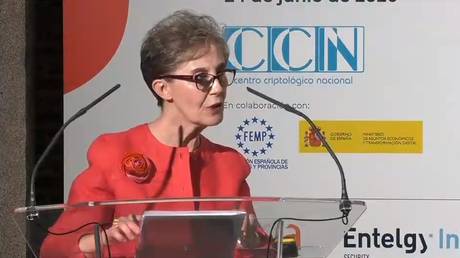 Spain has fired national intelligence center (CNI) director Paz Esteban on Tuesday in the wake of two spyware scandals. One operation saw key figures in the Catalan independence movement targeted with Israeli spyware program Pegasus, while the other scheme, allegedly foreign in origin, saw top officials in Madrid’s government also subjected to “illicit” and “external” targeting with the same software.

The former spy chief reportedly acknowledged last week that her agency had spied on 18 members of the Catalan independence movement with judicial approval, including the regional president Pere Aragones.

Allegations that Madrid spied on pro-independence Catalan politicians since 2017 were first revealed through a joint investigation by the Guardian and El País in 2020, and with further findings published by Toronto-based cyber research firm Citizen Lab earlier this year.

The Spanish government said an “external” actor had spied on PM Pedro Sanchez, defense minister Margarita Robles and interior minister Fernando Grande-Marlaska, but would not name the culprit publicly.

Robles, whose department oversees the CNI, acknowledged there had been “shortcomings” – including the fact that it reportedly took a year to discover three of the nation’s top officials had had their phones hacked – but insisted on referring to the personnel shakeup as a “new step” for the intelligence agency, focusing more on Esteban’s replacement, CNI veteran Esperanza Casteleiro.

“She knows the center very well, has worked there for almost 40 years, and is working for Spain,” the defense minister continued, adding that she hoped the documents Esteban had revealed before the congressional committee detailing the surveillance of the Catalan officials would eventually be declassified so the nation could see all judicial rules had been followed.

Madrid’s handling of the scandals has been attacked from all sides. Conservatives have accused the socialist PM of throwing Esteban under the bus to please the Catalan independence movement. Catalan leaders insisted that firing her was “a concession to common sense,” while the leftist Podemos party has demanded guarantees such events won’t happen again. Even Amnesty International has weighed in, accusing Madrid of using official security “as an excuse to cover up possible human rights violations.”

Pegasus, made by Israeli company NSO Group, infamously allows the attacker to remotely snoop on the target’s iPhone as well as watch and listen through the camera and microphone. It has been found installed on the phones of activists and political opposition leaders around the world, despite its manufacturers’ insistence that it was only sold to governments looking to use it to track criminals and terrorists.