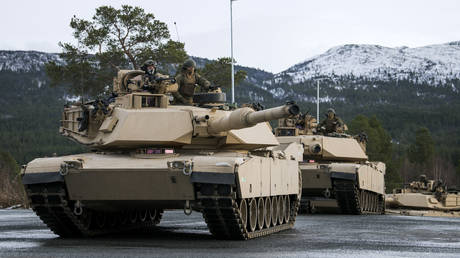 Kiev will get what it asked NATO for, but will it be enough?

NATO countries’ proposed tank supplies to Ukraine is the top news story this week. Kiev has been calling for these weapons from its western allies since the beginning of the Russian offensive, and it looks like now, 12 months into the fighting, these demands are being met.

The US has announced it will send 31 Abrams main battle tanks to Ukraine. In a hastily scheduled speech on Wednesday President Joe Biden noted that American tanks are complicated to operate and maintain, so the US will provide Kiev with “parts and equipment necessary to effectively sustain these tanks on the battlefield.”

It was also confirmed on Wednesday that the German government will send Leopard 2A6 tanks from its own stock and will allow other nations, such as Poland, to transfer German-made tanks, to Ukraine. On January 14, London announced plans to ship its Challengers 2s to Kiev while Paris’s decision on supplying French AMX-56 Leclerc vehicles also seems inevitable.

Russian experts and journalists have been locked in a heated debate over the differences between these western main battle tanks and the Russian T-90s, comparing their armor, guns, accuracy, active and passive protection systems, maneuverability, fire-control systems, ammunition, and many other attributes.

At the end of the day though, these discussions lack any practical value. The battlefield is the only litmus test for all advantages and drawbacks of any type of weapon or military equipment. Reliable statistics on combat use are all that is required for a comparative analysis of modern main battle tanks, if it is to be credible.

Another thing to remember is that all tanks are vulnerable to modern anti-tank systems, so the question is, how many NATO tanks are going to make their way to Ukraine?

How many tanks does Kiev need?

To simplify calculations, we’ll be using an armored division, the main structural and tactical unit of armored forces in the former Soviet republics, as our yardstick. According to Soviet manuals, an armored division must have 296 tanks, 230 infantry fighting vehicles, 54 self-propelled artillery systems, over 2,000 regular vehicles, and almost 12,000 soldiers and officers.

How many divisions does Kiev need? At least one per each of the three main fronts — in Lugansk, Donetsk, and Zaporozhye. The line of contact in the special military operation zone right now is 815 km long, making three divisions too modest an amount to make a difference, but let’s disregard this for the time being.

Three armored divisions combined would have a total of about 900 tanks. Apart from that, another armored division may be necessary on the Belarusian front, which could see some very heavy fighting. In case of an escalation there, an armored division or a similar unit in reserve is a must, which drives the number of required tanks up by 300 to 1,200.

Finally, no commander-in-chief can do without his own reserve, the so-called reserve of the supreme high command. Without at least one armored division, this reserve cannot really count as such, which means another 300 tanks for a required total of 1,500.

Another thing to consider is probable Ukrainian losses during offensive operations. The average daily losses of an armored unit in this case stand at 10 to 15%. About 15 to 20% of incapacitated tanks are typically irrecoverable losses, while the rest require repairs (general maintenance for 30 to 50%, medium-level repairs for 15 to 30%, and an overhaul for 10 to 20%).

Simply put, at least another 300 tanks are required to offset losses during combat operations. This gives us a figure of 1,800 tanks, which must be considered an absolute minimum.

These are very approximate and somewhat simplistic calculations, yet they give us ballpark figures.

How many tanks will Kiev get?

So far, NATO countries have earmarked tanks for Ukraine numbered in the dozens. This is only a fraction of the hypothetical minimum.

Great Britain and Poland have officially pledged an armored company each, respectively consisting of up to 14 tanks. Germany will supply a similar amount, while the US is preparing the supply of 31 Abrams heavy weapons.

At a recent meeting of the US-led Defense Contact Group at Ramstein Air Base in Germany, officials from 12 countries discussed sending a total of about 100 tanks to Kiev, if Berlin were to give the green light, which, according to an ABC report, it has done.

Rheinmetall could additionally supply a total of 139 tanks to Ukraine, including 88 Leopard 1s and 51 Leopard 2A4s, yet the German manufacturer concedes that only 29 of them could be shipped before the summer of 2023.

What impact will NATO’s tanks have?

Will all these tanks see combat any time soon? Let’s consider the example of the M1 Abrams, which is seen as one of the symbols of US military power.

A small number of these tanks manned by poorly trained crews and lacking full-scale maintenance and supply infrastructure support would most likely yield negative results. They will fail to change Ukraine’s fortunes on the battlefield, while images of burning American tanks will likely hurt US public opinion.

Thus, one of America’s premier weapons, the pride and joy of its defense industry, will be humiliated on the battlefield for a long time. This is something the Pentagon can’t allow to happen under any circumstances.

Therefore, before any actual fighting happens, evacuation teams, tank repair units, and spare part supplies must be in place, while crews must receive superior training to handle American tanks.

Last but not least, the first deployment of US main battle tanks in Ukraine must be accompanied by a significant Ukrainian army success, at least at the tactical level, which would necessitate no fewer than 200–300 (maybe even 400–500) tanks.

Otherwise, supplying the M1 Abrams to Ukraine makes neither military nor political sense. Transferring them one company (10 to 15 tanks) at a time would only mean that this equipment will burn on the battlefield without making any significant impact or even catching anyone’s attention.

So far, Russia has not had any significant trouble dealing with enemy equipment. Since the launch of the military operation, according to Lieutenant General Igor Konashenkov, the Russian Ministry of Defense spokesman, Russian forces have destroyed 376 planes, 203 helicopters, 2,944 UAVs, 402 anti-aircraft missile systems, 988 MLRVs, and 3,898 field artillery guns and mortars.

As well as 7,614 tanks and other armored vehicles.

No room for complacency

It’s very likely that the first NATO tank companies will be used as training units for Ukrainian crews, while Poland will initially provide maintenance and repair capacity for servicing German or American tanks.

One shouldn’t think, however, that training will stretch over a very long time. It can take just weeks to do a full training program, while teaching T-64/84 crews to fight in the M1 Abrams or the Leopard 2A5 could be completed in a matter of days.

What matters in the reports about the West mulling tank supplies to Ukraine is not the tanks themselves as much as the breaking of a taboo, which, until recently, prevented the transfer of heavy western-made armored vehicles to Ukraine.

Once this taboo is broken, there is every reason to assume that, sooner or later, Kiev will receive not only the 1,800 western main battle tanks it badly needs, but much more than that.

At that point in time and maybe even earlier, Ukraine will be able to create a strike force on the Zaporozhye front for example. If a force like that succeeds in breaching Russian defenses, it could cover the 82 km to Melitopol in less than three days, which would dissect the whole depth of the Russian defense in this region.

With this in mind, the Russian armed forces must achieve tangible military and political results long before western arms supplies reach their full potential.