HomePolitics
By LordOfDailytimes on June 6, 2021 Politics 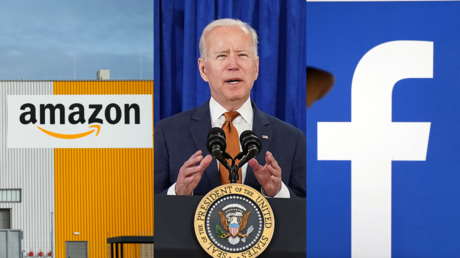 The US has promised that Amazon and Facebook will fall under the new global tax rules agreed by the G7 nations. But even in countries with rock-bottom rates, megacorporations have paid effectively nothing for years.

Finance ministers from the Group of Seven (G7) countries agreed on Saturday to implement a global minimum corporate tax rate of 15%. Bringing in this minimum rate is a goal of the US President Joe Biden administration, and while it will need to be debated by the G20 and Organisation for Economic Co-operation and Development (OECD) later this year, US Treasury Secretary Janet Yellen hailed the agreement as “a historic achievement.”

The agreement won’t directly affect companies paying tax in the G7 nations, all of which levy corporate taxes at or above 15% already. It will, however, affect firms headquartered offshore, particularly American tech companies that can easily assign intellectual property rights to their foreign subsidiaries and dodge the 21% demanded by Uncle Sam.

The tech giants “will qualify by almost any definition” for the planned tax regime, Yellen said on Saturday, referring to Amazon and Facebook in particular.

The largest Silicon Valley corporations have been vocal in their support for the Biden administration’s tax plans. “We strongly support the work being done to update international tax rules,” a Google spokesperson told the media, while an Amazon official said that the agreement is “a welcome step forward” toward a stable international tax regime. At home in the US, Chamber of Progress, an industry group funded by companies including Amazon, Facebook, and Google, has expressed support for Biden’s plan to raise the US’ corporate tax rate from 21% to 28% (a plan shot down by Republicans in Congress last month).

Yet for these megacorporations, paying a few percentage points less in tax isn’t where the savings are. Amazon, Google, Facebook and their ilk can back Biden’s proposal relatively safely, as long as loopholes exist that allow these firms to pay even less on their profits than the numbers suggest.

Ireland is at the center of this arrangement. The Emerald Isle is a friendly place for American multinationals: EU membership, an educated, English-speaking workforce, and a corporate tax rate of 12.5% have lured Amazon, Google, Facebook, Microsoft, and Apple to set up their European headquarters in Dublin and Cork. These firms are some of the biggest names of more than a thousand US multinationals headquartered in Ireland.

As the current president of the Eurogroup, Irish Finance Minister Paschal Donohoe attended Saturday’s G7 meeting. Donohoe has been an outspoken defender of Ireland’s rock-bottom corporate tax rate, but the Irish government rarely collects the full amount from these firms.

Microsoft’s Irish subsidiary, for example, paid zero tax last year on a profit of $315 billion. The company is headquartered in a law office in Dublin, and has no employees other than its directors. It generates profit by collecting license fees from the use of Microsoft software around the world, and although the company is registered in Dublin, it is a “tax resident” of Bermuda, which doesn’t levy corporate tax.

Google used the same arrangement, known as the ‘Double Irish, Dutch Sandwich,’ until 2020 to dodge Ireland’s already low tax rate. The arrangement is so-called because it involves an Irish company (Google, in this case), moving profit to a Dutch holding company, and finally to an Irish company in Bermuda. Ireland considers the company to be a Bermuda  tax resident, while the US considers it to be tax resident in Ireland, meaning profits are safe until the company moves them back to the US, if it chooses to.

Google deployed this tactic in 2019 to shift $75.4 billion in profits out of Ireland without paying tax.

The money could have covered Ireland’s entire annual healthcare budget, built 100,000 homes to alleviate the country’s housing shortage, or paid off a sizable chunk of Ireland’s national debt. Yet the Irish government is loath to upset the multinationals, considering they employ nearly a quarter of the Irish workforce and even when loopholes are discounted pay 80 percent of the country’s corporate tax.

And, when the final details of the Biden-backed tax scheme are hammered out with the G20 and OECD, time will tell what new pathways to tax avoidance the world’s richest companies will discover.