HomePolitics
By LordOfDailytimes on February 18, 2021 Politics 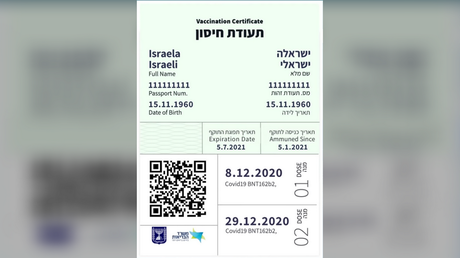 While Israel prepares to welcome only vaccine recipients into gyms, hotels, and other venues, thousands have been making their own ‘Green Pass,’ the easily-counterfeited credential the country is using to prove vaccination.

The Green Pass looks complex enough, with the secure-looking QR code on the lower-right side, but the code is just made up of the same details printed on the pass in normal letters and numbers, cybersecurity expert Ran Bar-Zik revealed in a Facebook post earlier this week. The pass can thus be easily forged by anyone with a graphics program and a printer.

Israel will officially reopen businesses from gyms and hotels to malls, museums and libraries on Sunday. However, only those who can prove they have been vaccinated or had Covid-19 will be welcome in the gyms, hotels, and swimming pools, and only they will be allowed to attend sports and cultural events.

But having over 100,000 Israelis buying and selling fake passes on social media, a market the Times of Israel reported on Thursday is already moving at a healthy pace, defeats the purpose of having a vaccine pass. The passes are going for about 750 shekels ($230), according to Haaretz, and even before the businesses reopen their doors can exempt the holder from quarantine.

Bar-Zik went on at length in his post about how easy it would have been to make a secure version using the same kind of digital signature deployed all over the internet in HTTPS and other common protocols and expressed frustration that supposedly tech-forward Israel had not deployed this comparatively ancient technology in a piece of ID considered to be so important. He was far from the only cybersecurity professional to take the news public – the firm Check Point also came forward, sharing a video with Haaretz that even walked the user through the process of faking the Green Pass.

The Health Ministry has attempted to minimize the issue, telling Channel 12 it is “looking into implementing a secure barcode that will be internationally accepted” and that the current situation is just an “initial quick response.” Meanwhile, Health Minister Yuli Edelstein warned that a 5,000-shekel fine ($1,500) awaited anyone who tried to get away with using a fake pass.

Edelstein has tried to warn vaccine refusers that their lives will be lonely ones if they do not line up for the jab, declaring last week that “whoever doesn’t vaccinate will only go out to supermarkets or pharmacies, while the vaccinated will go to stadiums and gyms.” He has also threatened to have workers in certain industries fired if they do not get the jab or submit to being tested for the virus every 48 hours, though Deputy Attorney General Raz Nizri cautioned that such laws cannot be passed on a local basis regarding the education sector.

Despite the country’s vaunted high vaccination rate, a quarter of those who have not received the jab say they have no intention of getting it, according to a Tuesday poll cited by the Times of Israel. In another poll conducted on Tuesday by the Rushinek research institute, only 41 percent of parents said they would vaccinate their kids when the shot became available for individuals under 16, with 30 percent responding they were unsure and 29 percent saying they would skip the jab.

Over a quarter of Israeli deaths in January were Covid-19-related, the Central Bureau of Statistics announced on Thursday, adding that the total number of deaths that month was 14.1 percent higher than January of 2020. Some 5,486 Israelis have died with the virus since the start of the pandemic, according to the Health Ministry.