HomeSport
By LordOfDailytimes on September 26, 2022 Sport 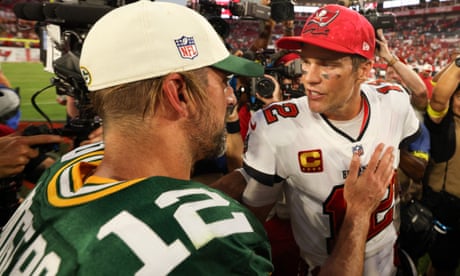 If Sunday was the last time we witnessed two of the most prolific quarterbacks in NFL history face off against each other, the game will be remembered more for tension than either man raging against the dying of the light (although one of them has been raging against electronics). With eight Super Bowl victories (Tom Brady with seven) and seven MVPs (Aaron Rodgers with four) between them, the two have solidified themselves as the best quarterbacks of their generation (along with Peyton Manning who, it is easy to forget, is only a year older than Brady.)

But those expecting an offensive explosion on Sunday when the Tampa Bay Buccaneers and Green Bay Packers met were most likely disappointed. Brady’s first half was one to forget as he failed to lead the Bucs into the end zone and entered halftime down 14-3. Rodgers looked sharper in the early moments of the game, achieving some first-half success against the Bucs’ stingy defense by throwing two touchdowns. But both men were largely anonymous in the third quarter, the explosive plays and ruthlessness that have given them so much success down the years largely lacking.