HomePolitics
By LordOfDailytimes on February 3, 2021 Politics 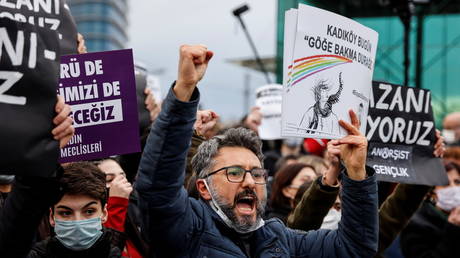 The Turkish president has denounced demonstrators as “terrorists” as educators and students alike protested against the controversial appointment of a government loyalist to head Istanbul’s most prestigious university.

“I do not accept these youngsters, who are members of terrorist groups, as sharing our country’s national and moral values,” Turkish President Recep Tayyip Erdogan said in a video address.

“Are you students… or are you terrorists who try to raid the office of the rector and occupy it?” he continued.

Erdogan’s appointment of Melih Bulu, an academic and former political candidate, as rector at the prestigious Bogazici University in Istanbul in early January has engendered fierce debate over the government’s reach, and triggered protests around the country.

As demonstrations gathered strength this week, more than 250 protesters were arrested in Istanbul and 69 others in Ankara. Demonstrators say Bulu’s appointment was undemocratic and have called on him to resign as rector, which he has refused.

Erdogan claimed he would not allow mass anti-government protests like the ones that swept across Turkey in 2013, noting: “This country won’t be a country dominated by terrorists. We will never allow it, this country won’t re-live incidents such as the Gezi events at Taksim.”

Tensions flared over the weekend after students were arrested on charges of inciting hatred and insulting religious values for displaying a poster depicting Islam’s most holy site, the Kaaba in Mecca, adorned with LGBT flags.