HomePolitics
By LordOfDailytimes on May 8, 2022 Politics 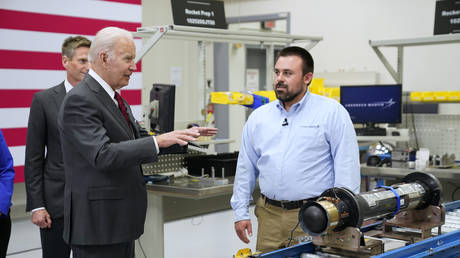 Rep. Mike Gallagher, a Republican from Wisconsin, has claimed that the US’ rush to arm Ukraine has “burned through” years worth of weapons stockpiles, hampering Washington’s ability to simultaneously arm Taiwan against potential conflict with China. Meanwhile, the US’ vast military industry is lobbying the White House for more contracts.

“We are running low in terms of our stockpiles,” Gallagher, who sits on the House Armed Services Committee, told Fox News on Friday. “We just burned through seven years of Javelins and that’s not only important as we continue to try and help the Ukrainians win in Ukraine, that’s important as we try to simultaneously defend Taiwan from aggression from the Chinese Communist Party.”

“They are going to need access to some of these same weapons systems, and we simply don’t have the stockpiles at present in order to backfill what we’ve spent in Ukraine,” he continued.

The Biden administration has thus far given Kiev almost $4 billion in military aid, and President Joe Biden is currently pressing Congress to pass his $33 billion Ukraine aid package, $20 billion of which would fund weapons and other military support for Kiev. Additionally, he is expected to sign the Lend-Lease Act of 2022 on Monday, reviving a piece of World War II-era legislation to allow the US to export unlimited quantities of weapons to Ukraine.

The Javelins referenced by Gallagher are shoulder-fired anti-tank missiles, and the US has already sent more than 5,000 of these to Ukraine. While the Pentagon does not publish exactly how many of which weapons it has in stock, an analyst at the weapons industry-funded Center for Strategic and International Studies told PBS last month that this represents about a third of the US’ stockpile.

The analyst added that around a quarter of the US’ stockpile of Stinger anti-air missiles have also been gifted to Ukraine.

Prior to Gallagher’s warning, Reps. Adam Smith (D-Washington) and Mike Rogers (R-Alabama), also of the House Armed Services Committee, wrote to Joint Chiefs of Staff Chairman Mark Milley to order the replenishment of these short-range missile stocks and invest in modernized replacements.

Weapons manufacturers are also awaiting contracts from the Pentagon to step up production. These firms – who have already seen their stock prices rise by up to 60% since Russia launched its offensive in Ukraine in February – told the Wall Street Journal last month that they need more money to guarantee against shortages.

“All of this points to the need to think of the defense industrial base as a capability in and of itself in which we need to invest,” Eric Fanning, president of the Aerospace Industries Association, told the newspaper. “We need to be investing in it in a sustained way so it’s there when we need it to surge.”

In a congressional hearing in late April, David Berteau of the Professional Services Council, a trade association representing government contractors, called on lawmakers to “push” the Pentagon into increasing production, the paper noted.

Amid the Biden administration’s unprecedented effort to arm Ukraine, it remains unclear how many American weapons shipments actually end up in Ukrainian hands. Russia has declared supply convoys “legitimate targets” and has destroyed several warehouses of western weapons. However, a US intelligence source recently told CNN that Washington has “almost zero” idea where its weapons end up, describing the shipments as dropping “into a big black hole.”

LordOfDailytimes
Previous ArticleGame 4 Notes: Keefe tweaks top line, Cooper downplays Campbell
Next Article Flames looking to get back to their game by cutting down on penalties