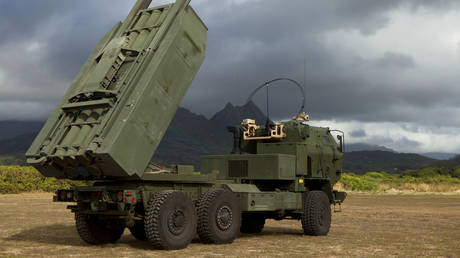 The US Army Europe and Africa command announced on Sunday it would be sending two High Mobility Artillery Rocket Systems (HIMARS) along with approximately a dozen personnel to Latvia, to take part in NATO-led national readiness military exercises.

The M142 HIMARS systems are set to arrive in the Baltic state on Monday to take part in the fall phase of the so-called NAMEJS exercises, lasting from September 5 to October 9. The US-made artillery systems will be used on September 26 and 27 in order to demonstrate the rapid deployment of long-range precision launches to NATO’s eastern border.

“NAMEJS is designed to increase readiness, lethality, modernization and interoperability by exercising U.S. Army Europe and Africa’s ability to rapidly deploy long-range precision fires capabilities in coordination with our allies and partners, and integrate joint fires in a multinational environment,” reads a statement on the command’s website.

The exercises will also reportedly involve Spain’s National Advanced Surface-to-Air Missile System (NASAMS) to provide training for antiaircraft protection, according to Captain Matiss Students, a planning officer with NATO’s Air Force, who warned Latvian residents that there will be low-altitude military training flights in the eastern regions of the country during the exercises.

Aside from NAMEJS 2022, NATO intends to carry out additional exercises in the region under the moniker “Silver Arrow.” The US-led bloc announced that some 4,200 troops from 17 member states will be taking part in these exercises, which are meant to “strengthen the unity of land and air forces” and improve their combat capabilities and readiness to “deter and defend.”

The exercises come as tensions between Moscow and NATO continue to grow amid the ongoing Ukraine conflict. After Russian President Vladimir Putin announced a partial mobilization last week, which seeks to draft some 300,000 reservists into the Russian armed forces, several Baltic states and Poland have called for an increased NATO presence on the bloc’s eastern flank.

Moscow, meanwhile, has warned that it will not hesitate to use “any means at its disposal” to protect its territorial integrity and would respond in kind if NATO decided to carry out an attack on Russia using nuclear or other weapons of mass destruction.

LordOfDailytimes
Previous ArticleRuthless USA score 145 points to set Women’s Basketball World Cup record
Next Article Dmitry Trenin: Russia and the US still have time to learn the lessons of the Cuban missile crisis and prevent a nuclear war