HomeSport
By LordOfDailytimes on July 15, 2022 Sport 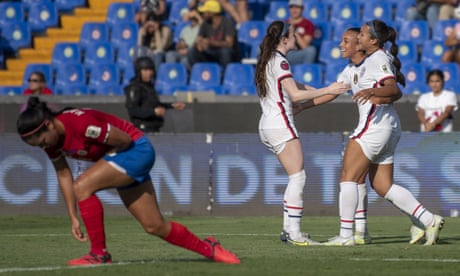 Emily Sonnett, Mallory Pugh and Ashley Sanchez all scored to send the US national team to the final of the Concacaf W Championship with a 3-0 semi-final victory over Costa Rica on Thursday night.

Costa Rica and the United States both finished among the top four teams in the group stage to qualify for the 2023 Women’s World Cup. The winner of the W Championship additionally earns one of the region’s spots in the Olympics.

LordOfDailytimes
Previous ArticleThe Open 2022: Young leads after first round at St Andrews – as it happened
Next Article Gausman’s return shows promise, but Blue Jays remain frustrated in loss to Royals