HomeSport
By LordOfDailytimes on September 11, 2020 Sport 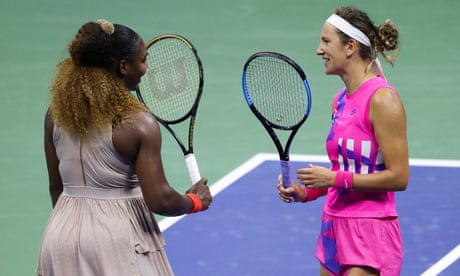 The US Open finalists were determined on one of the great nights of women’s tennis in New York as Victoria Azarenka produced a sublime performance to recover from a first set demolition against Serena Williams, finally winning 1-6, 6-3, 6-3. Earlier, Naomi Osaka overcame Jennifer Brady in high class 7-6(1), 3-6, 6-3 tussle. Azarenka will face Osaka in a rematch of the Western & Southern Open final two weeks ago, which Osaka withdrew from with a hamstring injury.

Thursday night marked only the second time in 18 years that three current multiple slam champions simultaneously reached a slam semi-final. For Williams and Azarenka, this meant the rekindling of one of the defining rivalries of the previous decade. The pair have stared each other down in 23 matches over 12 years and such familiarity was an asset for Williams early on. She had struggled through a triad of three-set matches over the fortnight, but on Thursday was all too aware that her previous form would not suffice.

Related: Azarenka shocks Serena Williams to set up US Open final against Osaka – as it happened