HomePolitics
By LordOfDailytimes on November 13, 2020 Politics 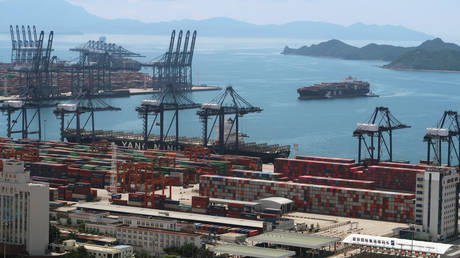 Authorities in Wuhan claimed on Friday they had detected coronavirus on the packaging of a batch of Brazilian beef. The Chinese city, where the pandemic began late last year, has stepped up efforts to test frozen foods.

The Wuhan Municipal Health Commission found three positive samples on the outer packaging of frozen, boneless beef from Brazil, it said in a statement. The beef was shipped to Qingdao Port on August 7. It reached the central Chinese city in 10 days and remained in a cold storage facility, the commission added.

It has taken 200 environmental samples, and more than 100 staff members at the Wuhan facility underwent tests.

China is the top beef buyer in the world, with Brazil and Argentina being its largest suppliers. Earlier this week, Chinese authorities said they had found coronavirus on the packaging of Argentinian beef, while the Shandong province said that another imported beef sample was also positive.

China has been testing imported food for the virus since late June. In mid-August, authorities claimed they had detected Covid-19 in a cargo of chicken wings, also imported from Brazil. They said the virus was present in a sample collected in the southern city of Shenzhen.

Two months after “residues of Covid-19” were found in chicken wings, Chinese officials said that traces of coronavirus were detected in Brazilian beef packaging at the Port of Dalian.

Testing and disinfection of food imports has been stepped up this week, after health authorities recently found some port workers to be infected with the virus.

LordOfDailytimes
Previous ArticleIf You’re Thinking of Investing in a Watch, We Recommend You Make It This One
Next Article France to oppose US withdrawal from the Middle East during Pompeo Paris visit