HomePolitics
By LordOfDailytimes on November 17, 2022 Politics 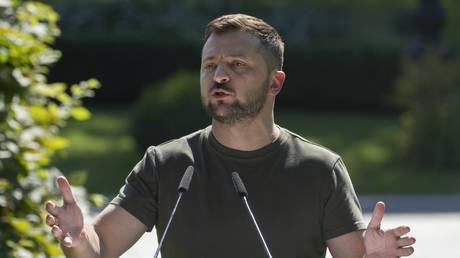 The Ukrainian leader’s insistence that a Russian missile hit Poland is “a lie that could get millions” killed, the Fox News host said

Ukrainian President Vladimir Zelensky could be “lying on purpose to get us into a war,” Fox News host Tucker Carlson declared on Wednesday night. Zelensky’s refusal to admit that a Ukrainian missile caused a fatal explosion in Poland makes him “not worth supporting,” Carlson suggested.

Zelensky “was commanding the US to lead the Third World War immediately” after the blast, Carlson told his viewers. “The only problem is that it was completely and utterly wrong.”

The Ukrainian leader described the explosion, which killed two people, as a Russian attack on NATO territory and called on the West to put Russia “in its place” in response. Anonymous US intelligence officials seconded his claims in statements to the press.

Moscow argued that debris at the blast site showed that it was caused by a missile from the S-300 air defense system, a piece of Soviet-era kit fielded by Ukraine. Within hours, the leadership of the US, NATO, and Poland had all publicly stated that the explosion was caused by a Ukrainian anti-air missile.

Zelensky doubled down. “I have no doubt that this is not our missile,” he said in a video address. “I believe that it was a Russian missile, based on our military reports.”

“That’s not only untrue,” Carlson said. “It’s a lie that could get millions of Americans killed. So you have to ask yourself, is it time to stop backing this guy? Could the risk be too high? He’s lying on purpose to get us into a war?”

“Maybe he’s not worth supporting in the first place. Maybe he’s just another corrupt Eastern European strongman in a tracksuit, getting as rich as he can on American handouts.”

Carlson has been a long-time critic of the US’ support for Zelensky, arguing that Ukraine is not democratic, and that intervening in its conflict with Russia is not in the US’ national security interest.

Zelensky has since walked back his claims, saying on Thursday that Kiev doesn’t “know for 100%” what happened.