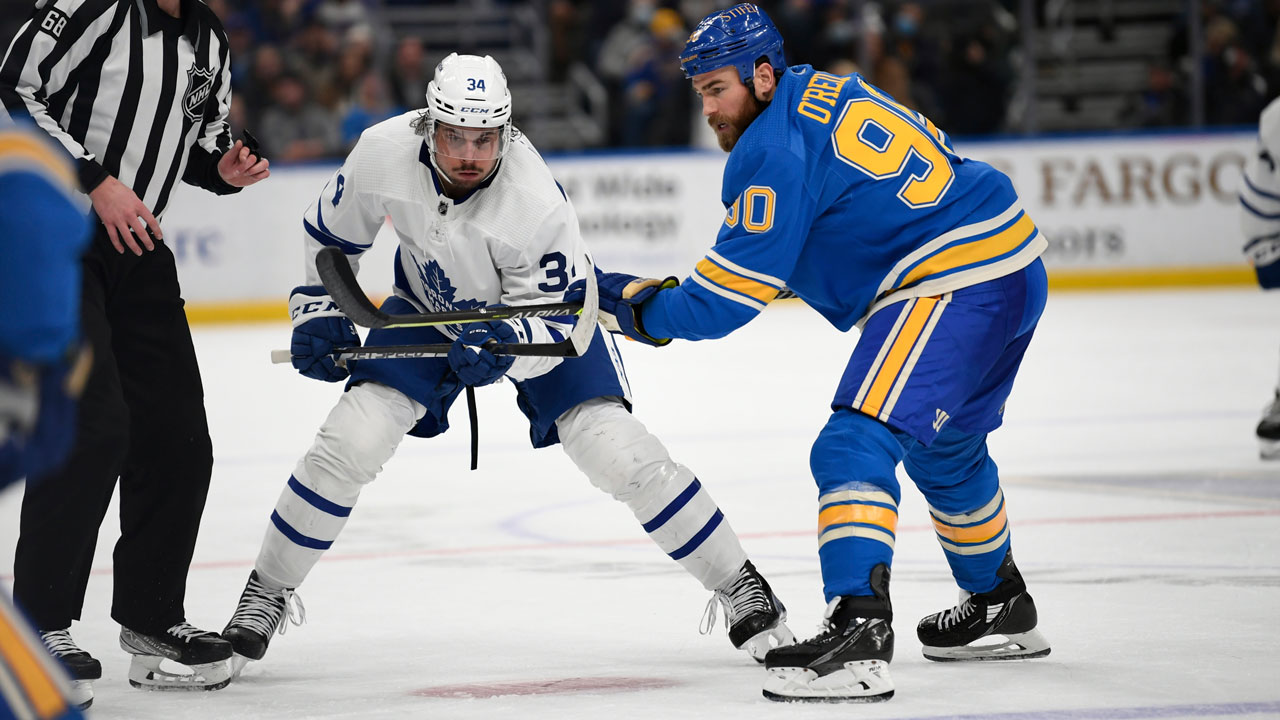 The Toronto Maple Leafs fly home having swiped five of a potential six points against three of the West’s best five teams — Colorado, Vegas and St. Louis — on this road trip.

But after earning then losing 3-1 leads in every one of those heavyweight tests, the path to secure those points was anything but tidy.

To dish the Blues their first regulation home loss in 14 games Saturday, Toronto needed to come from behind twice. They needed to win the first third period of this rocky roadie. And they needed one more save than the other guys in an 11-goal thriller waged by two of the top three teams by save percentage in the NHL.

“I don’t know when’s the last time, if ever, Jack Campbell in a Leafs jersey given up five in 22 shots,” said a bewildered Sheldon Keefe, after a wild 60 minutes of swearing and emoting.

Both head coaches blew their timeout before the game was half over. Momentum shifted violently. And the stars came to play in Toronto’s edgy and entertaining 6-5 victory.

“Just back and forth, up and down, bit of roller coaster,” Auston Matthews agreed. “But we found a way to win, and we’re going home with two points — which is all that matters.”

So what if Marner hadn’t scored a goal since November? Hadn’t registered a point since suffering a fluke shoulder injury at practice? Or hadn’t played a game in a week due to COVID protocol?

When he rejoined the group for Friday’s practice in Arizona, his teammates commented on how refreshed and upbeat the video-game junkie looked after all that time stuck at home playing virtual-reality tennis and golf on the new Oculus system he treated himself to.

“A lot of pep, a lot of energy. I think he really missed the guys,” Matthews said. “If anybody can kind of bounce back and be as much of himself as possible, it’s definitely him.”

Marner made good on his linemate’s prediction, beating Jordan Binnington high-glove with a pretty unassisted effort and cueing up Matthews’ third-period tying goal on the power-play with a deceptive pass from behind the net.

“I thought he was great tonight. Don’t forget, he hasn’t played in a while,” Keefe praised. “Good legs. Whether it was his goal or the big-time pass he makes on Matthews’ power-play goal to tie the game, that’s what Mitch does. He’s a game-breaker like that.”

As ever, the pass-first Marner wants to be a dual-threat because he believes that if goalies respect his shot, that can only present Matthews with more quality looks, too.

“I know I can score. I’ve done it a lot of times, and I got to make sure I get that mindset that I can score,” Marner said.

Liljegren gets a souvenir

Promoted to the top four alongside Jake Muzzin with Justin Holl in COVID protocol, rookie Timothy Liljegren picked a fine time to register his first NHL goal — a one-timed blast from the point that sailed through so much traffic, he didn’t even see it bend twine.

“That’s a bullet. Good for him,” Marner exclaimed. “He’s always kind of stone-faced, but he comes with great energy. He’s a fun guy to be around. It’s a hell of a goal. It’s a rocket.”

The Leafs bench erupted. Jason Spezza made sure to go fetch the puck, which Liljegren says he’ll find a special place for in his condo back in Sweden. And buddy Rasmus Sandin rubbed Liljgren’s head while Sandin’s father, Patric, tweeted in celebration:

Meanwhile, Keefe was oblivious to the goal’s personal significance.

The coach has been on the bench for the vast majority of the defenceman’s North American games since being drafted in 2017 and had seen him score for the Marlies on multiple occasions.

“I wasn’t really even aware that it was his first one, but it certainly was a great one,” Keefe smiled. “And we’re thrilled for him.

“He played a great game today. Moved the puck really well. Helped us on the breakout. Got us out of trouble sometimes. At times got himself in trouble, but then bailed himself out. Yeah, it was great for him.”

Yes, Ryan O’Reilly may have outscored Auston Matthews heads-up 2-1 on this night, but there was no mistaking whose line felt better about the result.

The Bunting-Matthews-Marner unit out-chanced the opposition 14-6 at even-strength; Matthews himself whipped a game-high eight pucks on net; and all three members of Toronto’s top line scored.

Matthews now has a ridiculous road streak of goals in 10 straight (12 total), and his 25th of the season vaults him into a tie with Alex Ovechkin for second overall in the Rocket race.

“It starts with myself. I was horrendous defensively tonight. Wasn’t hard enough to play against,” O’Reilly said. “We got what we deserved.”

Matthews’ most noteworthy play was by design.

On an offensive draw, the Leafs centre knew the onetime Selke winner would try to pull hard and inside on the backhand, so he instructed Bunting to charge to the net and whacked the faceoff forward toward Binnington’s crease.

The quick surprise caught the Blues off-guard and worked like a charm.

“It was a great play by him. It was really smart,” O’Reilly said. “It was a tough one to eat.”

On a seesaw night that packed plenty of high-end skill and creativity into the first 10 goals, the 11th was a weak one by a player enjoying a strong season.

Hard on the puck all night, Ilya Mikheyev threw a puck toward Binnington with under four minutes in regulation that seemingly went right through the goaltender.

Mikheyev himself didn’t realize it was a good goal until he saw John Tavares celebrate. Keefe didn’t either, until he saw the referee point and caught Binnington’s dejected body language.

“Funny how that one ends up being the difference-maker. We’ll certainly take it,” Keefe said. “Those are the types of goals that go in when you have a season [2020-21] full of basically no luck.”

Is luck the difference this year, Mikheyev?

Even though the Maple Leafs don’t have a home game on the docket until Jan. 26, the club flew home after this western swing for some family time and practice days prior to jetting to New York City for Wednesday’s game against the Rangers.

After switching time zones four times in eight days, Keefe says it was “a no-brainer” to squeeze in some quiet time in Toronto before heading back to the States.

“It’s a nice little reset. Get to see your family and the cats,” Jack Campbell said.

Sandin has something else fluffy in mind.

Meanwhile, down in the AHL, Josh Ho-Sang executed a celebration even more entertaining than his go-ahead goal…

Josh Ho-Sang scores his 11th of the season and then does the robot.#Marlies up 3-2. pic.twitter.com/RGdlk9Ql9x