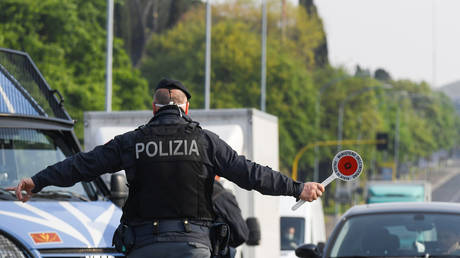 Italian police have diffused a car bomb near the Stadio Olimpico in Rome, which was discovered ahead of the Euro 2020 football match between Italy and Switzerland. The city’s mayor said the device was found in an official’s car.

The explosive device made of gunpowder and bolts was found wired into a vehicle a few kilometers from the stadium on Wednesday, Italian daily Il Fatto Quotidiano reported.

A bomb alert was triggered and police cordoned off the street after the device was discovered by a passer-by in the Italian capital’s Prati area at around 6pm local time.

Police called in a bomb squad to defuse the device, which had been planted in the car of municipal official Marco Doria.

Mayor of Rome Virginia Raggi confirmed the discovery in a tweet and said she expressed her “full solidarity” with Doria, who she said is responsible for overseeing the “redevelopment of parks and historic villas” in the city.

LordOfDailytimes
Previous ArticleWATCH: Squatters and left-wing radicals clash with German police in Berlin, 60 officers injured
Next Article Most Germans say freedom of speech is in jeopardy, many name Islam and patriotism among topics they cannot speak freely about